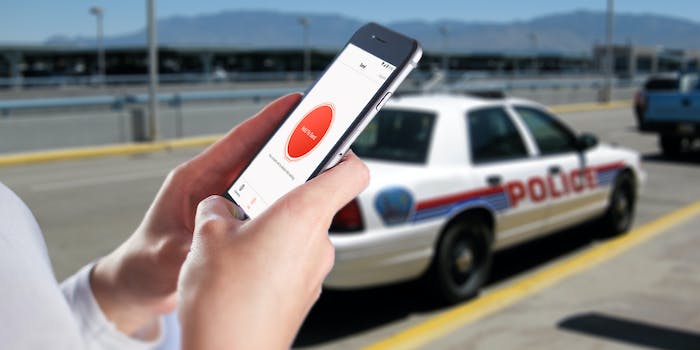 The ‘Notifica’ app is preparing undocumented immigrants for encounters with ICE

With a tap of a button, users can notify family if they're about to be detained.

When Oakland Mayor Libby Schaaf warned her community that U.S. Immigration and Customs Enforcement (ICE) would be raiding the Bay Area in February, her alert was met with mixed reactions. While allies of undocumented immigrants cheered Schaaf’s quick thinking on Twitter, ICE officials attempted to exaggerate the consequences of her decision; President Donald Trump outright called Schaaf’s behavior “a disgrace.”

While well-intentioned, actions like Schaaf’s aren’t as helpful to immigrant communities as one would hope. There’s a lot at stake when ICE agents are in the streets, and inciting fear can actually put people in harm’s way.

That’s why United We Dream, the largest youth-led immigrant network in the U.S., developed Notifica, a safety planning mobile app that helps prepare communities for the worst possible outcome of an ICE encounter.

“Oftentimes, there’s this misconception that what is needed is to let people know, ‘Hey, there’s an active raid happening around you.’ But the reality is that without preparation, it’s just chaos upon chaos,” Adrian Reyna, an Oakland resident and the director of membership and technology strategies for United We Dream, told the Daily Dot. “The difference with Notifica is planning is in the hands of individuals, so if something does happen, they activate a network that is ready to support them, and we’re not dealing with the structural challenges of creating panic in immigrant communities by just deploying thousands of notifications that say, ‘Hey, ICE is outside.’”

With the Notifica app, users can notify friends, family, or legal representation if they suddenly encounter police or ICE agents and anticipate being detained. Upon downloading the app, users can create a phone number-based account that only they can access with a six-digit passcode, pre-write messages to be sent to people they want to alert if they are ever detained, and “fire” the messages off en masse when necessary.

Notifica’s sample messages give users an idea of what they might want to tell their support systems, such as “If you do not hear from me within two hours, I’m detained,” and “Please contact my family and come find me.” The app also includes a “know your rights” guide to refresh users on what to do if they encounter immigration officials.

If the user encounters ICE or police, they can open up Notifica and deploy the app’s messaging feature by tapping and holding down the deploy button for three seconds. The app then fires off the pre-written messages to those particular contacts and sends each recipient a Google Maps link to the user’s estimated location.

The Daily Dot’s own test of Notifica showed that out of 10 trials, a majority of the messages arrived to recipients within one minute, if not within seconds, of the app’s firing.

The app is available in both English and Spanish (though the Daily Dot flagged one pre-programmed phrase that had only been sent in English) with the language corresponding to the sender’s language settings. And while some lengthy messages arrived intact, Reyna recommended that users keep their messages short and to the point to avoid any unnecessary confusion.

Given growing concerns over ICE’s use of social media profiles and records requests of Facebook data to target undocumented immigrants, Reyna, who is undocumented himself, understands the importance of security. All the information saved to the app is encrypted, allowing only the user to see messages created or sent on the app. (Early negative anonymous App Store and Google Play reviews allege otherwise; Reyna characterized these critiques as fake and unsubstantiated.)

Any information sent to receiving parties is deleted from Notifica’s servers in 30 days, and while Reyna did not want to disclose specific details of Notifica’s security features, he told the Daily Dot there is no way the application can be used by to track someone.

Once the app fires, it erases the pre-saved messages and contacts and requires the user to log in again with the six-digit passcode, ensuring that no one can have access to information that can put users in danger. For that same reason, pre-saved messages cannot be accessed or edited once they’re saved, only deleted. In the case of a false alarm, users would have to use their phone’s typical communication methods to inform people they weren’t detained. The contact numbers cannot be recovered through Notifica once the messages fire off.

United We Dream has had Notifica in production since long before Trump’s presidential win and formalized a partnership to develop the app with consulting firm Huge in December 2016. But the app’s arrival feels like an act of resistance amid months of the most drastic, widespread targeted ICE raids in the agency’s existence.

In January, ICE raided 98 7-Eleven franchises and made 21 arrests, what was thought at the time to be the largest operation targeting an employer since Trump’s inauguration. Then, earlier this month, 550 children stayed home from school the day after ICE carried out the largest raid on a business in a decade, according to the Intercept, arresting 97 workers at a slaughterhouse in Morristown, Tennessee.

This kind of fear is something Reyna knows first-hand. In March 2017, Reyna flew to Austin, Texas, to present the Notifica prototype at the annual South by Southwest conference. On a connecting flight to San Diego, Reyna found himself being escorted to a private room by airport security. Reyna, who has two last names but only uses the first, was told by an agent that the name on the ticket was not his and that he needed to be further screened. Reyna told the Daily Dot that his two last names had never been an issue before.

Reyna said after being approached by another six officials and placed in a room with three agents watching him, he texted a friend at United We Dream but put his phone away after an agent pointedly questioned what he was doing. Authorities released Reyna after 45 minutes but required he be accompanied at his gate until his flight boarded. Even then, Reyna worried that once he touched down in San Diego, ICE would be waiting to detain him and take him the 16 miles to the California-Mexico border to deport him. Luckily, no threat ever came.

Though Reyna has spent years in immigration spaces and working with undocumented immigrant-focused organizations, he realized he found himself at a loss for what to do when TSA took him aside.

“Even for me, I have years of doing this stuff, I was so panicked that I didn’t know what to do. That’s when it all clicked for me that… you don’t know what to do because you’re petrified of what could happen,” Reyna said. “So if everything is ready to go, just click a button and just go, that’s in and of itself what we were channeling into this development.”

Truly, the ingenuity—and compassion—of Notifica seems necessary when you’re an undocumented person living in Trump’s America. Since the president took office, immigrants—legal permanent residents, undocumented, and temporary status-protected alike—have been relegated to feel ashamed of their status and live in fear of having their livelihoods taken away. Be they a college student who had fallen out of status with the Deferred Action for Childhood Arrivals (DACA) program, or a Haitian immigrant who now has an expiration date on their decade-long life in the U.S., Trump’s attacks on an institution fundamental to the existence of this country has made an immigrant’s self-advocacy all the more difficult and divisive.

Notifica, to an extent, gives undocumented immigrants agency and control over what happens to them if the unfathomable became inevitable, regardless of Trump’s vision or their own history of advocacy. You don’t have to be an immigration lawyer, or an activist, or even a vocal self-advocate to put these safeguards in place should something like what happened to Reyna happen to you.

“There is power in community, and in this time, although our instinct may be that we need to keep to ourselves, actually the more safe thing is to lean on community,” Reyna said. “Even if it’s just a neighbor, even if it’s just… a member of church, the people at your workspace, just people that you can have a real conversation with, just say, ‘Hey, let’s make a plan. If this were to happen, this is what we need to do.’ And so that’s the goal.”

One week after Notifica’s March 28 debut, the app had more than 8,500 downloads, but Reyna said United We Dream plans to partner with local organizations to more effectively introduce the app to undocumented communities. And the development team is already thinking of ways to allow users to see the reporting volume and activity on a national level with a “heat map” of sorts.

Although the app is intended for undocumented communities to better prepare for an encounter with immigration agents, there’s really nothing preventing someone from using Notifica for any other planned notification system. Notifica’s developers understand the potential it has for contacting support groups in any urgent manner, Reyna said, and that undocumented people aren’t alone when it comes to Trump’s crosshairs.

“To think that any of these communities that are being attacked by unfair government policy are mutually exclusive is unrealistic,” Reyna said. “Ultimately, we want Notifica to help deserving, hardworking people that are in need.”