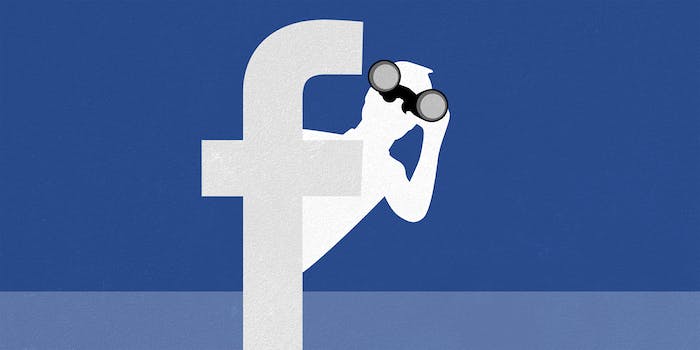 In a report from the publication, the emails and documents, obtained through a public records request, detail how agents obtained backend Facebook data—including an account access log, IP addresses, phone numbers, and locations—to help them locate people. (According to an Intercept correction, the documents didn’t make it clear that the target of the investigation was an immigrant or whether they were being pursued for immigration violations.)

One specific email shared how an agent could combine Facebook data with “IP address information back from T-Mobile,” resulting in another agent saying they sent an expedited summons to the phone company. Another email said the agent would consult with “our Palantir guy,” referring to the Peter Theil-ran data analytics firm, about additional Western Union information.

Matthew Bourke, an ICE spokesperson, told the Intercept that he would only say, “we have the ability to seek subpoenas and court orders to legally compel a company to provide information that may assist in case completion and subsequent prosecution.”

“Court orders are an established procedure that is consistent with all other federal law enforcement agencies. Additionally, investigators can use open-source information that is readily available on various social-media platforms during the course of an investigation,” Bourke continued.

According to a Facebook spokesperson, ICE does not have “unique access” to this data—it simply files these government requests.

“Facebook does not provide ICE or any other law enforcement agency with any special data access to assist with the enforcement of immigration law. We have strict processes in place to handle these government requests,” the statement from Facebook read. “Every request we receive is checked for legal sufficiency. We require officials to provide a detailed description of the legal and factual basis for their request, and we push back when we find legal deficiencies or overly broad or vague demands for information.”

Nathan Wessler, an ACLU staff attorney, told the Intercept that it’s “trivially easy” for ICE and other law enforcement agencies to issue these legal subpoenas for information, since a judge doesn’t need to approve them. While companies occasionally push back, he said, they usually comply.

According to Facebook’s count, it complied with 85 percent of 32,716 requests for data between January 2017 and June 2017. Of the legal subpoenas received from U.S. agencies, 57 percent included a non-disclosure to not alert affected users.

Correction: This article has been updated to reflect that the suspect in the documents obtained by the Intercept couldn’t be confirmed as an immigrant; it also includes a longer statement from Facebook.