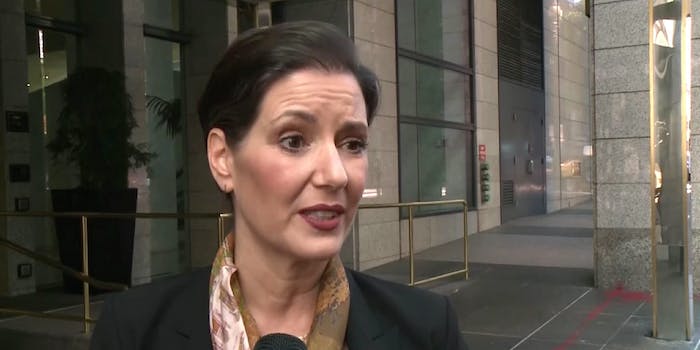 I will 'continue to act with the values that have guided' me, she says.

President Donald Trump has called the community-protecting actions of Oakland Mayor Libby Schaaf “a disgrace,” but she’s not backing down.

Speaking at a cabinet meeting on Thursday, Trump said Schaaf put the lives of immigration agents in danger last month when she warned her community that U.S. Immigration and Customs Enforcement (ICE) would be raiding Northern California’s Bay Area, including Oakland. Trump then said the administration would be “looking at [the operation] with respect to her individually.” Trump’s comments came days after the Justice Department filed a suit against the state of California and Gov. Jerry Brown for the state’s sanctuary city laws prohibiting law enforcement from working with immigration agents.

“They were all set, this was long in the planning and she said get out of here and she’s telling that to criminals,” Trump said. “What she did is incredible and very dangerous from the standpoint of ICE and border patrol. Very dangerous. She really made law enforcement much more dangerous than it had to be. So we are looking at that situation very carefully.”

Schaaf’s warning, issued on Feb. 24, alerted residents of ICE preparing to launch a raid within the next 24-hours of that day.

“As mayor of Oakland, I am sharing this information publicly not to panic our residents but to protect them,” Schaaf wrote in her notice. “My priority is for the well-being and safety of all residents―particularly our most vulnerable—and I know that Oakland is safer when we share information, encourage community awareness, and care for our neighbors.”

Attorney General Sessions also criticized Schaaf at a meeting in Sacramento, asking of her, “How dare you needlessly endanger the lives of law enforcement just to promote your radical open borders agenda?”

The mayor of Oakland, however, isn’t bothered by President Trump’s nor Sessions’ comments, telling reporters that she’s “proud to live in a country where everyone can criticize elected officials.”

“How dare you vilify members of our community by trying to frighten the American public into thinking that all undocumented residents are dangerous criminals?” Schaaf asked in response to Sessions’ critique.

Schaaf said she was appreciative of her community and their supportive comments, and that much of the criticism has come from outside of Oakland. She continued by saying she feels confident that the courts will help “see some clarity” regarding the ongoing struggle between local, state, and national immigration policies, that it’s her duty to speak up about Oakland’s values, and that she feels confident that her actions have been legal.

According to CBS SF Bay Area, Schaaf could have potentially violated obstruction of justice or aiding and abetting laws for having notified her community of the ICE raids, including undocumented immigrants facing criminal charges. However, Schaaf all but said if she had the opportunity, she’d alert her community once more.

“I will continue to act with the values that have guided me to date in this office,” Schaaf said, before stating, “Happy International Women’s Day, President Trump.”