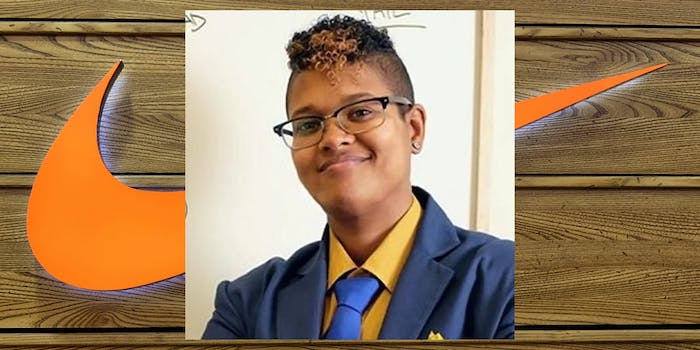 They say Nike only pays lip service to LGBTQ issues.

A transmasculine non-binary software engineer who used to work for Nike has filed a legal complaint against the company, claiming they experienced discrimination because of their gender.

Jazz Lyles, 36, started working for Nike at its Beaverton, Oregon, headquarters in May 2017. According to Lyles, they communicated their gender and pronouns to the Nike recruiter before they started but despite Nike’s inclusive outward image, Lyles’ pronouns were never respected by their colleagues or superiors.

“They talked a great game on LGBTQ issues,” Lyles said to their local paper the Willamette Week, “but when you ask them to actually stand up for these issues, it gets communicated to you that you are the problem.”

Lyles says that their co-workers repeatedly used female pronouns in spite of their requests and that some co-workers openly discriminated against them, while supervisors did nothing to stop it. One example from the complaint filed with the Oregon Bureau of Labor and Industries says a co-worker told them they refused to use Lyles pronouns because of their “religious beliefs.” Another co-worker, after Lyles sent them an article explaining the importance of pronouns, refused to speak to them again.

Rather than work to make the team more accepting, Lyles supervisors had them transferred to a different team, where the discrimination was even worse. Lyles said one co-worker in an early interaction said to them, “I’m really not sure what to call you. I know I’m not supposed to call you ‘shemale.’” Nike did hold gender training for some of Lyles co-workers, but because the training was so specific Lyles said it made them feel singled out, and that it, “exacerbated the issues.” They compared it to, “holding a training on racial sensitivity with the only team with a black person on it.”

Although Lyles had their contract extended twice, they were rejected last month for a full-time job. Nike claimed Lyles was not hired due to a “hiring freeze” but the complaint they filed alleges that this is untrue and that another contractor was given a full-time position at the same time Lyles was rejected. Nike has yet to comment on the allegations.