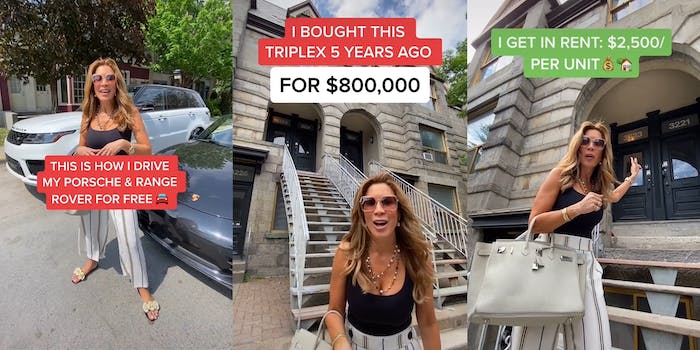 A TikTok video showing a real estate guru and landlord proselytizing her real estate investment ideas to enable her to purchase luxury cars ends up also doubling as a more broad societal indictment, according to one Twitter user.

And with the landlord touting her spoils from someone else’s rent, left-leaning online users began a viral backlash against capitalism.

Economist and housing advocate Paul E. Williams (@PEWilliams_) tweeted a TikTok video made by famous Montreal-based real estate brokerage owner and guru Tatiana Londono, detailing how she used an investment property to afford a Porsche and a Range Rover. Williams, however, captioned his repost with, “We should improve society somewhat.”

Williams also made a screenshot with a particular graphic showing her take-home profit as a landlord, but he points out that she made the video directly in front of what is essentially her tenants’ homes. Meanwhile, the argument could be made that she’s exacerbating the struggles of non-wealthy people trying to afford housing.

In a couple of hilariously short but cogent replies to the video, he suggests government take part in the potential investment, purchase, and renting real estate as a state apparatus leading to equitable housing.

Of course, others had their fun, half-joking about the need to make more money to feed a landlord’s coffers: “Imagine realising that all of your rent goes towards a fraction of your landlords car expenses,” tweeted @artisanofthealp.

Others see an opportunity to reinforce the idea of having the 1% of the world to pay their fair share in taxes. Molly Conger (@socialistdogmom) also saw the Londono’s TikTok as a case for taxation: “120% tax on tiktok landlords immediately.”

@CarlBeijer replied to Williams, noticing the transformation regarding the language around capitalism, as it pertains to rich people like Londono: “I feel like within my lifetime there’s been a significant rhetorical shift from rich people talking about how hard they worked to get where they are to rich people bragging about *not* having to work for their money.”