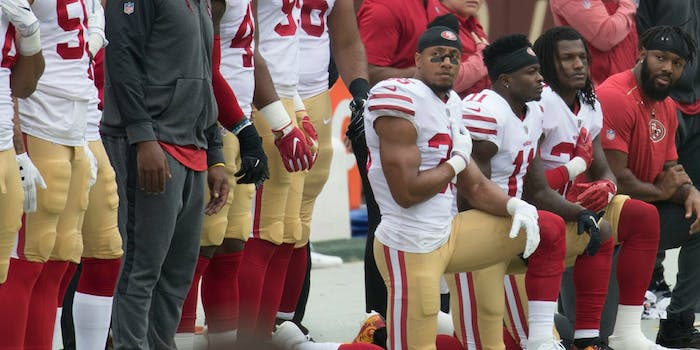 Game ads have never been the place for a 'political statement,' the NFL said.

A veteran’s organization has accused the NFL of “corporate censorship” after both entities failed to resolve a disagreement over a Super Bowl ad condemning national anthem protests.

According to USA Today, AMVETS submitted an ad for the game’s official program that featured service members, the American flag, and the phrase, “Please stand.”

NFL spokesman Brian McCarthy told the publication that it had reached out to AMVETS to have them consider using the phrases “Please Honor Our Veterans” or “Please Stand for Our Veterans.” AMVETS then asked if the ad could also include the hashtag “#PleaseStand,” but was told it was too late in the production process to approve the ad.

“We looked to work with the organization and asked it to consider other options such as ‘Please Honor our Veterans,'” McCarthy said. “They chose not to and we asked it to consider using ‘Please Stand for Our Veterans.’ Production was delayed as we awaited an answer. As the program was going to production, the organization asked about including a hashtag and was informed that approval would not be provided in time and was asked to approve the ad without the hashtag. The organization did not respond and the program ultimately went into production to meet deadlines.”

AMVETS’s issue over controlled advertising and national anthem protests reignites a contentious conversation between NFL players, coaches, and fans just weeks before the largest American football event of the year. In mid-2017, professional athletes across the NFL and other sports initially took a knee during the national anthem in brazen rejection of President Donald Trump calling NFL protesters, such as former 49ers quarterback Colin Kaepernick, “sons of bitches” who need to be fired.

Despite the show of solidarity from other athletes, Kaepernick’s original protest peacefully demonstrated against police brutality. And while critics of the silent protests, such as Trump, argue that kneeling during the anthem “disrespects” the flag and the U.S. troops, Iraq and Afghanistan Veterans of America reported in October that 26 percent of veterans said they would continue to watch NFL football games and support the players right to protest. Another 14 percent said they’d continue to watch, but disagreed with protesting, while 39 percent said they’d boycott watching in disagreement.

“The protests are very much out of our purview,” he said. “We were not looking to comment on those. This is part of our Americanism program” in which the organization conducts seminars in schools and with youth groups on the proper way to display, care for, and respect the flag.

However, while AMVETS asserted that the NHL and NBA had allowed similar ads for their official programs for all-star games, McCarthy said that another group, the Veterans of Foreign Wars of the U.S., had also submitted and been approved for a Super Bowl program ad that had the phrase “We Stand for Veterans” and described the organization’s benefits.

“The Super Bowl game program is designed for fans to commemorate and celebrate the game, players, teams and the Super Bowl,” McCarthy said. “It’s never been a place for advertising that could be considered by some as a political statement. The NFL has long supported the military and veterans and will again salute our service members in the Super Bowl with memorable on-field moments that will be televised as part of the game.”