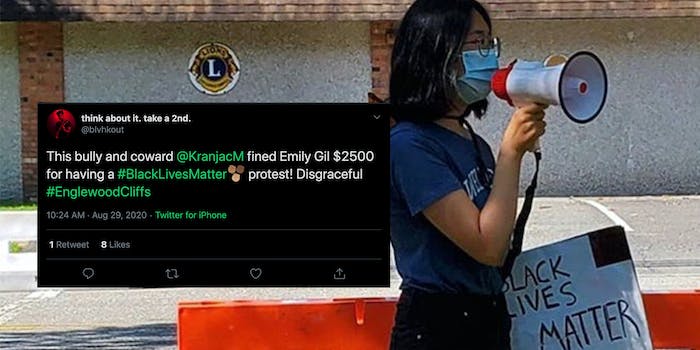 He eventually rescinded the charges.

After organizing a Black Lives Matter rally in her Northern New Jersey hometown, 18-year-old activist Emily Gil says that she was charged a $2,500 fine by her mayor for police overtime. According to CBS News, the mayor has since stated that he will be rescinding the charges on the bill.

In an interview with NJ Advance Media, Gil said that she believes Black residents are unfairly priced out of her hometown in Bergen County. “Englewood Cliffs has dodged affordable housing requirements for 40-plus years,” she said. “I find that unacceptable.”

In response, she organized a peaceful 90-minute Black Lives Matter rally on July 25, which attracted a crowd of about 35 in size, according to the Root.

Shortly after the organized demonstration, Gil received a letter by Englewood Cliffs Mayor Mario M. Kranjac. According to AP News, the letter stated that her failure to meet with officials before the event had led to a scramble in organizing security and safety measures around the protest.

“Please promptly forward your payment to the borough in the amount of $2,499.26 for the police overtime caused by your protest,” it read. “Your lack of notification left the borough with little time to prepare for your protest so that the police department and department of public works could ensure that everyone would be safe.”

Gil told CBS News that she was shocked at the assumption she must pay in order to express her First Amendment right.

Gil said that in an effort to meet with officials without putting herself or others at risk amid coronavirus concerns, she attempted to join them via Zoom meeting. Her request, however, was essentially declined. She said they “kept pushing for an in-person meeting,” eventually ghosting her altogether.

After writing to Englewood police to dispute the bill, Gil received a response that the department had notified the borough’s officials of preparations that were necessary for the event, including the overtime fees that would eventually be charged.

In a statement to NJ Advance Media, Kranjac said, “As with any privately-sponsored event that takes place in the borough requiring police safety, an invoice was sent to the organizer for police overtime since it would be unfair to require our residents to financially support a private event.”

Additionally, he stated that he is not a proponent of unaffordable housing and that everyone is welcome in the borough. He said the affordable housing issues of Englewood shouldn’t be linked with the protest held in July.

Gil said she suspects Kranjac’s response to the situation was completely based on her stance in support of universally affordable housing.

“Englewood Cliffs is trying to intimidate and silence people who are standing up for Black Lives Matter and the implementation of affordable housing,” Gil said.