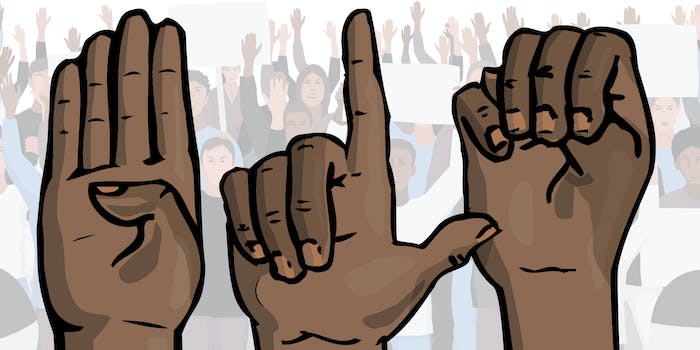 For the Deaf community, partaking in social justice conversations is reliant on accessible content.

Charlotte Hyde, 22, needed to watch this video on Twitter, at least according to others who were tweeting about it.

It wasn’t that Hyde didn’t want to; it was that she couldn’t.

As protests sparked by the police killing of George Floyd ensued across the nation in recent months, videos of protesters’ interactions with each other and with police flooded Twitter. Few had captions, making them inaccessible to deaf people like Hyde.

For the Deaf community, partaking in larger conversations on social media is reliant on accessible content.

“Deaf people want to be a part of the conversation,” Hyde told the Daily Dot in an email. “We can’t do that when important content isn’t captioned. It was really hard when I’d see tweets with captions like ‘You NEED to watch this!’ and I just couldn’t, because I couldn’t hear it.”

Sometimes users post transcripts in the replies—but not always. A few people on Twitter noticed that the increasing number of protest videos were mostly inaccessible, so they formed Protest Access.

The group of volunteers provides transcripts for videos related to the Black Lives Matter movement on social media. Users simply tag the group’s Twitter account after they see a video without captions, and the team gets to work.

Over 250 volunteers help with transcribing and captioning videos, and around 30 organizers help coordinate other logistical aspects.

Jordan “Jo” Stoeger, a 29-year-old organizer who helps manage the requests the group gets, told the Daily Dot that Protest Access gets tagged on four to 12 new videos per day. Once, after a particularly busy night of protests in Oregon, Stoeger said they were tagged on 31 videos in one day.

Since their start in June, the group has posted over 500 captioned videos.

Most videos can take around two weeks to be posted, Stoeger said. When a video is requested multiple times or considered a safety risk, organizer Micah Fahar, 28, said it’s flagged as a priority video. Those videos are typically posted in two or three days, Stoeger said. Videos that are becoming popular memes are also prioritized because they allow people to participate in larger, cultural conversations, Fahar said.

Leigh Ann Cowan, 24, is Deaf (the capital “D” can indicate identifying with cultural deafness) and told the Daily Dot that she shares content from Protest Access every day. Cowan said until users provide accessibility features like captions and alternative text, which describes the content of an image, people’s content is incomplete.

“Providing accessibility is so important because it signifies the recognition of humanity,” Cowan told the Daily Dot in an email. “When you caption your videos and write alt text, you’re acknowledging a different experience of the world, and that people do exist outside yourself, and that they have equal rights to participation.”

Cowan said she loves what Protest Access does but wishes creators would caption their own content so it wasn’t necessary.

Fahar said sometimes the need for captioned videos is understandable because they come from individuals at a protest who may have posted them while still there. Organizer Lisa Perdue, 28, said if social media apps made information about accessibility more available or the features easier to use, it could help smaller creators provide accessibility.

“Accessibility should not be an afterthought,” Fahar said. “This should be part of your ground up.”

Fahar said there have been instances where people have asked that Protest Access take a video down because it contained misinformation. The group did not remove the videos, and Fahar said doing so would have been against the its mission to provide full access to whatever people ask for.

Perdue also hopes to create a more inclusive team of organizers. Currently, most people on the team are non-Black, and Stoeger is hard of hearing and the only non-completely hearing organizer.

“We’ve been trying to do outreach to get members of the communities that are actually impacted by the work we’re doing involved more directly, whether that be creating an advisory board so that deaf and Black and blind people can actually kind of lead our vision as an organization and lead our practice and potentially also hopefully, become organizers themselves,” Perdue said.

As allies, Fahar said others need to step up to make the conversation accessible for everyone.

“Disabled people are a marginalized community and we’re currently in the middle of fighting for some of the most marginalized communities out there,” Fahar said. “When we say Black Lives Matter, we mean all Black lives, we mean Black disabled lives, we mean Black trans lives. Every Black person’s life matters and Black people are in all kinds of communities.”

Editor’s note: This article has been updated to reflect the use of the capital “D” in “Deaf community.”

Correction: This article has been updated with the correct spelling of Jordan “Jo” Stoeger’s last name.