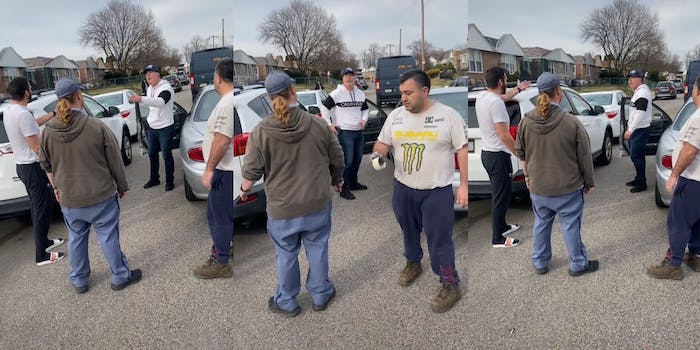 ‘I want to live in this neighborhood’: Neighbors defend Amazon driver after man allegedly shouts at her for parking in the street

'It's the men that stopped to help and hold him accountable.'

An Amazon driver has sparked a debate on TikTok after posting a video of a man allegedly shouting at her for parking on the street.

In the video shared by user Deyes (@deyes__), viewers can see neighbors taking the side of the Amazon worker. The neighbors chastise the man, calling him names like “scumbag” and criticizing his apparent lack of patience.

The video currently has over 1.2 million views.

The video starts after the altercation is already underway.

“…People do have to earn money you fucking scumbag, so beat it,” one of the people in the video says, who appears to be a USPS worker.

The other neighbor makes another comment ending with an allegation that the man in question “sit[s] in [his] car and complains for 30 minutes every day,” which seems to imply the man’s outbursts are an ongoing issue.

After another comment, the man who was allegedly shouting at the Amazon driver asks, “You like this? Is this fun for you?”

His response causes an uproarious reaction from the two other neighbors present.

“Then mind your own fucking business,” the man states.

This argument goes back and forth for a while longer, with the apparent USPS worker noting that this whole interaction started because the shouter “had to sit in his car for three seconds.”

Eventually, the man gives in and returns to his car, at which point the neighbors and USPS worker apologize to Deyes. “Man, I deal with that every day,” she says.

In comments under the video, many users took Deyes’ side in the argument, with several users shouting out the others in the video.

“It’s the men that stopped to help and hold him accountable,” wrote one user. Deyes responded, “It needed to be done.”

“I love the support and how they rallied around you,” agreed another user.

“I want to live in this neighborhood,” added a third. “That’s family type of neighborhood.”

Still, while Deyes insists that if she “was in the wrong they wouldn’t have said anything,” a few users claimed that Deyes’ parking was unacceptable. To those users, Deyes made a response video.

@deyes__ Reply to @beam.2326 he had more than enough space to go around me bc agter 30 minutes of arguing with me he went around just fine #storytime #amazonworkrlife #toxic #toxicwork #karens #karen #kevin #harrasmentawareness #bullying #foryou #negative ♬ original sound – Ironhall Gym

In comments, she expounds upon the specifics of what happened.

“I park my van based on where I’m delivering left or right,” she says. “That’s how I parked it. In this case I had 7 boxes of [Fiji] water to deliver. 50lbs with no hand cart. The guy isn’t blocked. Multiple ppl passed with no problem. The guy had a problem as SOON as I parked.”

Additionally, she notes that, given Amazon’s extensive driver surveillance, the company would have noted if she actually did something wrong.

“Working for amazon, you have to stop completely at a stop sign, count to ten. Unbuckle and buckle [your] seatbelt at each and every stop. You can’t go 5 miles over the speed limit. If you’re on a 70 mph and you’re about to exit you have to go 25 mph. There’s cameras in the van. You can’t eat nothing,” she says. “If you need to eat or drink you need to pull over. EVERYTHING is watched. they watch us constantly. Everything we do is an infraction. And those aren’t even HALF of the rules.”

Deyes also says she doesn’t work for Amazon anymore, a comment she ends with the words “Thank God!”

No matter the exact situation, users agreed the man’s behavior was unacceptable.

As one user stated, “judging by the first video i just knewww he had enough room to go around, but either way he did not need to be treating you like that!”

The Daily Dot reached out to Deyes via Instagram DM and Amazon via email.