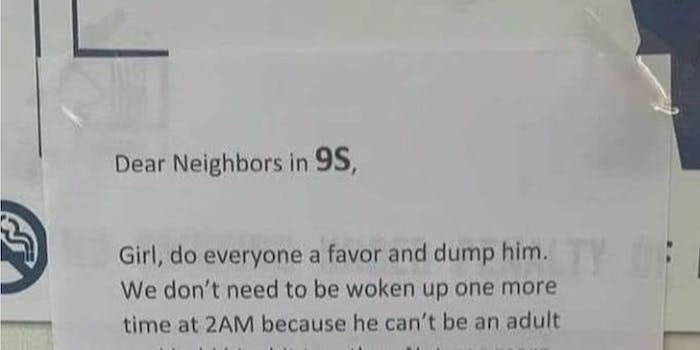 While the neighbor paints the boyfriend out to be the problem in the note, many think the woman is 'an abuser' after reading it.

A photo of a note between neighbors ignited discourse about domestic abuse on Reddit.

The note, posted to r/Trashy, was written by one tenant and addressed to their neighbors, a couple, in apartment 9S. The neighbor pleaded with the woman in the relationship to dump her boyfriend because the two were supposedly keeping the rest of the complex up at night with their disputes. The neighbor described “slamming doors,” “stomping feet,” and the boyfriend’s “whiny” yelling in the middle of the night. The neighbor added that the girlfriend was “right to hit him with an ironing board two years ago,” which upset many Redditors. The original poster noted the photo was not theirs. While it’s unclear when exactly the photo was taken, the post has received over 75,000 upvotes and 1,400 comments since being posted on Thursday.

“I’m more concerned that this neighbour is supportive of someone being hit with an ironing board,” a redditor wrote. “More context might be required.”

“sh*t hit him with an ironing board 2 years ago and they are still together? that is a toxic relationship if it was already that bad that long ago,” one user said.

“probably going to get downvoted but it’s never right to hit someone with an ironing board,” another commenter said. “domestic violence is real and not exclusively a gendered issue. she is an abuser and no matter what sort of c*ntish knob he is, violence is not the answer. walking way, leaving, splitting is. Walk away. Straight to anger [management]!”

Many took the opportunity to point out that the “trashy” parts of the post were the comments making fun of the ironing board incident, which several users felt was downplaying potential domestic violence.

“Trashier thing is normalizing and approving of domestic violence,” one redditor responded.

“That’s the trashy I see here, who ever encourages dv,” a commenter wrote. “I agree with everything else tho. Hope they can each get out of such an unhealthy relationship.”

The post has since been flagged by Reddit’s moderation bot with a warning to the original poster to make sure the content follows the site’s rules.

“This is a humor subreddit so posts about violent crimes or other things that make you angry don’t belong here,” the bot warned.