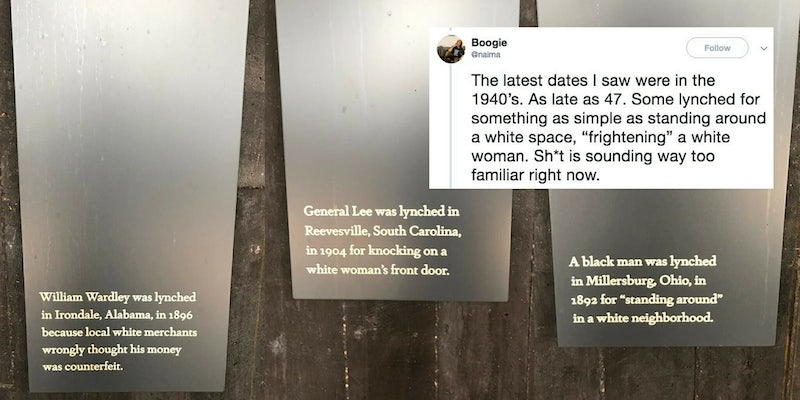 The excuses for lynchings are still pertinent today.

As Black Americans continue to be innocently murdered by police and have authorities called on them for insignificant excuses, one woman’s trip to the Memorial for Peace and Justice in Montgomery, Alabama, shows just how closely history appears to be repeating itself.

On Monday, July 9, Twitter user Naima Cochrane shared photos and videos of her visit to the memorial, also informally known as the National Lynching Memorial.

The memorial, opened in April by nonprofit Equal Justice Initiative, features 800 6-foot-tall steel monuments suspended from the ceiling, each for a different county, representing more than 4,000 total people who were lynched across America for a variety of unsubstantiated allegations. The memorial’s perimeter displays placards of the names of people lynched, and “reasons” for why.

We’re taking the “long way” back home so we could stop in Montgomery to visit the lynching memorial. Found the counties we knew. Found the name of a victim my grandfather used to tell stories about. pic.twitter.com/ziqnoeBGXP

In her Twitter thread of her time at the memorial, Cochrane shared some of these placards, writing, “Some lynched for something as simple as standing around a white space, ‘frightening’ a white woman. Sh*t is sounding way too familiar right now.”

One person, Jesse Thornton, was said to have been lynched in Alabama in 1940 for not calling a white police officer “mister.” Another Alabaman, William Wardley, was lynched in 1896 because he was thought by local white merchants to have used counterfeit money. The merchants were wrong. General Lee was lynched in 1904 for simply knocking on a white woman’s door.

The latest dates I saw were in the 1940’s. As late as 47. Some lynched for something as simple as standing around a white space, “frightening” a white woman. Sh*t is sounding way too familiar right now. pic.twitter.com/tCabOZluiw

“These stories rise up in our spirit every time a black person is killed extrajudicially at the hands of police officers,” Cochrane tweeted amid other placards, “every time someone decides our blackness in and of itself is suspicious and calls said police. They are ingrained into our American DNA: our freedom to think, speak, move, BE… challenged at every turn, because white people need to feel superior.”

There are multiple places in the memorial that remind us there are *thousands* of stories we’ll never know the details of. Names that will never be called. These stories rise up in our spirit every time a black person is killed extrajudicially at the hands of police officers… pic.twitter.com/mM7O5fAkYQ

… every time someone decides our blackness in and of itself is suspicious and calls said police. They are ingrained into our American DNA: our freedom to think, speak, move, BE… challenged at every turn, because white people need to feel superior. pic.twitter.com/bXngAfI4Sa

“I was familiar with the history and with various stories, but seeing it as a physical representation was overwhelming,” Cochrane told the Daily Dot.

Cochrane, a music entertainment executive and creator of the #MusicSermon Twitter series, told the Daily Dot that she took the photos and videos to emphasize the history of lynching and its role in brutality witnessed today, and how it goes beyond the history of Emmett Till, the teenager who was brutalized and murdered in 1955 for the accusations of a white woman that he had whistled at her. In 2008, the woman admitted that she made up the accusations.

Cochrane said she had noticed her Twitter thread going viral after John Legend, a friend of hers who she’s previously worked with, retweeted the thread. Legend has also worked closely with Equal Justice Initiative founder and director Bryan Stevenson, Cochrane said, whose efforts led to the memorial’s creation. The video opening the Twitter thread has so far gained 11,000 likes and nearly 5,000 retweets.

“I’m a bit surprised, but also happy that something this important and informative is spreading,” she said.

Without a doubt, even the stories of white people policing Black people and police brutality echo these instances. In the last few months, a Black child who missed the bus and got lost while walking to school was shot at by a white man after he knocked on the door to ask for directions. The wife of the man thought he was breaking in.

And white people have called the police on Black people for asking to use a Starbucks restroom and sitting in the vicinity without purchasing something, for selling water without a permit, for barbecuing with charcoal on a non-charcoal grill, for refusing to show identification at a private pool at which they were a member. The list goes on. And again, these are only the high-profile cases in the last month that have gone viral because of recorded video—not all cases that have been recorded, nor all the cases that occurred without someone capturing the altercation on tape.

“There’s a mindset that lynching was an uncommon occurrence during a time long long ago, and nothing like that can ever happen again,” Cochrane said. “The reality is Black lives in America continue to be over-policed, and we react so strongly because of our history. There are people who were part of lynch parties in the 40’s still living.”

Readers of Cochrane’s thread shared their emotions, commenting on the ways in which these murders still resonate today.

Wow that story perfectly illustrates how effective these attacks were as a terrorism tactic. Everyone spread the word far and wide each time

They just replaced the ropes with bullets.

Having to go to this museum and take a quiz on what you saw should be part of a mandatory sentence for every white person who calls the cops on black folks.

The predominant thought I had yesterday was how the people who most need to experience that memorial won’t. Probably don’t even know it exists.

Since the United States of America has been a nation, white Americans have been using the police to control and terrorize Black people. That's why some whites are so quick to call the police in the present time, it's a terrorism tatic. #WednesdayWisdom https://t.co/lxOGxHBXGN

Others shared their own documentations of the memorial and museum.

Did you go to the museum inside too or just the outdoor memorial? Also there’s the Rosa Parks museum. I went there for Juneteenth. pic.twitter.com/RHsoY6kERL

While some readers tried to distance the murders captured in the memorial from instances of police brutality and white aggression against Black existence happening today, it’s clear these two moments in history are connected, even if some don’t want to acknowledge it.

“You suspect these comments will stay in your own echo chamber, but people have responded telling me they had no idea. If even just one or two people saw my thread and are now thinking differently, I’m thrilled,” Cochrane said.