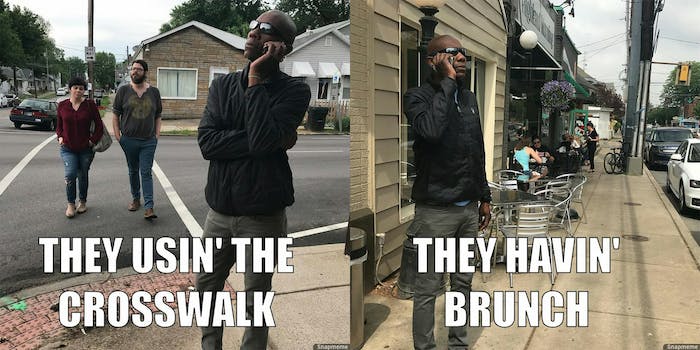 This comedian has the best take on ‘BBQ Becky’

In case you missed it, a white woman in Oakland, California was very upset recently over a group of Black people barbecuing in a park. Apparently, the group was in a designated barbecue area, but there was a city ordinance stating that they weren’t allowed to use charcoal grills. The fact that they were in violation of the ordinance was too much for the woman. She was so traumatized that she decided to call 911 and get the police involved.

Although several sources have claimed the woman is a professor who attended Stanford University, her identity has not been officially confirmed. The internet has dubbed her “BBQ Becky” and people are having no trouble letting her know how they feel about her very thinly veiled racism.

The Oakland barbecue racist lady memes are why I love Twitter. pic.twitter.com/4TDEYztmS8

Hello Oakland police. This is #BBQBecky. There are a bunch of Black people on rocks at Wakanda State Park and they're about to fish fry against city code 007. #BlackTwitter #BlackLivesMatter #Wakanda pic.twitter.com/JBgojOXRLl

Even Saturday Night Live got involved.

But perhaps the best response came from Nashville-based comedian Tim Northern, who decided to turn the tables and do some snitching on white people.

Northern told the Daily Dot in an email that he’s had to deal with incidents similar to what happened in Oakland “Too many times to count.”

“When I first saw the video, it disturbed me that she turned on the crocodile tears at the end,” he said.

The video inspired Northern to create some memes showing him calling the cops on white people for doing things like using the crosswalk and drinking lattes.

“I was in Starbucks just messing around and I figured I’d do just a couple for my friends and they kept sharing them,” he said. “They encouraged me to do more. I guess we spent about three hours doing them.”

The original Facebook post showcasing the memes has now been shared over 250 times, and Northern isn’t done yet. “Get ready for more memes of me snitchin’,” he said.

If you can’t wait, you can also catch the comedian May 30-June 2 at the second annual Tim Northern Comedy Festival.