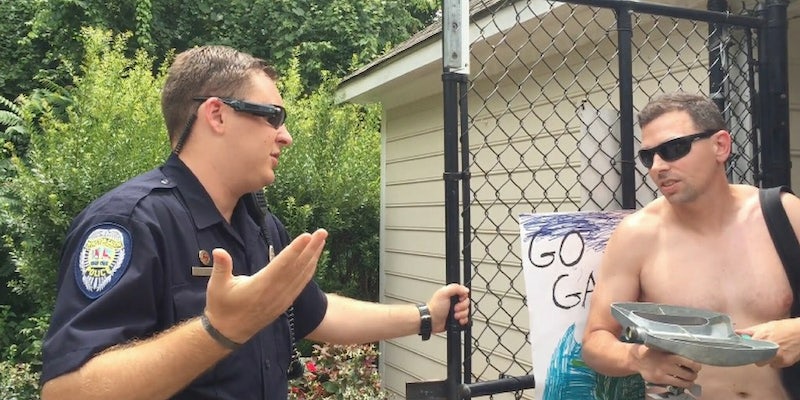 Say hello to ‘ID Adam,’ the latest white person to call the police on a Black neighbor for no reason

Another white person has gone viral for attempting to police a Black community member minding her own business, then calling the actual police on her. This time, the would-be white knight is a North Carolina man who has since been dubbed “ID Adam” for asking his Black neighbor using the community pool to verify her address.

On July 4, Facebook user Jasmine Edwards uploaded a video of a police interaction involving herself, an unidentified white woman, and a white man the Winston-Salem Journal has identified as Adam Bloom, a board member of the Glenridge Homeowners Association and the neighborhood’s pool chair.

Edwards, who is Black, captioned the video, “This is a classic case of racial profiling in my half a million $$ neighborhood pool. This happened to me and my baby today. What a shame!!”

After Edwards begins filming, Bloom points out that the police officers they’re speaking with have body cameras, to which she says, “good,” before asking Bloom to tell her what pool rule exists about showing identification of residence. He then points to the rules on the facility, which says that pool guests must sign in upon entry, though it’s later disclosed in the video that no one was on duty to take sign-ins.

“My son is also Black and he’s in the pool,” an unidentified voice says off camera, presumably to the unidentified white woman.

“And he walked only to me to ask for my ID,” Edwards says, before Bloom interrupts to say that he asks pool attendees for their IDs a “couple times a week.”

This man called the cops on a Black neighbor while she was using a community pool pic.twitter.com/oZerclloNG

After more back-and-forth, an officer then asks if there’s a “swipe card” to get inside, to which Edwards says yes, that’s what she used to get in. She then asks the officers what she can do to charge Bloom with racial profiling, to which an officer says she’d have to take him to court.

The group talks about the lack of sign-in before Bloom pushes for Edwards to show that she has her key card, and show that it works.

“I’m with a baby—am I going to throw the baby over?” Edwards says at the idea that her pool card didn’t actually work, leaving her to hop the fence to access the pool.

The police officer then uses Edwards’ key card to show it unlocks the door.

“Alright, perfect,” Bloom says after the officer unlocks it.

“Alright ma’am, well, I apologize for the time and the altercation that occurred, OK? Do you need anything from us?” the officer asks her.

“No, I don’t, I’m sorry you wasted your time to come here,” Edwards responds.

“No. A form of ID would be helpful to validate,” Bloom pushes again, despite the establishment of the fact that no one needs to show their ID in order to enter the pool.

Edwards then asks Bloom for an apology several times, to which he says, “I just said if you’d provide the address it’d be fine.”

The video, which Edwards uploaded to her Facebook page twice, has garnered more than 4 million views and 80,000 shares in the days since Wednesday’s incident.

“So sad you had to go though that at your own pool with your child. This guy Adam has to a miserable person in this life to come for you,” one person commented on the original video.

Across social media, Bloom’s critics have dubbed him “ID Adam,” following the pattern of nicknames given to white people caught on video attempting to police Black people who have done nothing wrong. These people include “Pool Patrol Paula,” who was arrested for assaulting a teenager who she said didn’t belong at the pool last month, and “BBQ Becky,” who called police in April when she saw Black community members using charcoal at a non-charcoal grill in a public park.

Got him! RT @ace1117venutec: This is #IDadam who works for #sonoco who called the cops because he saw a Black Lady with a baby in his community pool even though she had her pool keys. #racistoftheweek pic.twitter.com/geUcwZn7S1

So we have #IDAdam, #PermitPatty, #BBQBecky. Who else wants to show their entire ass?! Whew these folks are trash. I commend the victims in these situations for remaining calm because *I* would not.

So #IDAdam has no problem harassing black people, but can't defend his actions on TV. Also, he resigned from his position as "pool chair," but has still not apologized for what he did. Cowardly jerk, man up. https://t.co/PrT9F2CL60

While actors such as Bloom and the other nicknamed “vigilantes” harassing Black people for just living their lives seem to be on the rise, these instances are just a few of racial profiling incidents captured on cellphones, and just a few of even those that have gone viral. These altercations maybe new to viewers who haven’t born witness to racial discrimination, but they aren’t new to Black folks and non-Black folks of color, and are only the atoms at the tip of the iceberg as far as the complete history of racial discrimination in the U.S. goes.

Furthermore, pool access, as well as any other type of access to public spaces, restaurants, and housing, has an immensely charged racial history in the U.S. Through the 1920s and ’30s, public pools were only open to white people, and while public spaces began desegregating in the decades after, cities often chose to close public pools rather than desegregate them in the ’60s and ’70s. Private pools, however, continued to provide pool access for white Americans, still leaving out Black community members. Being that Edwards and Bloom were using a private community pool in a neighborhood with $500,000 homes nonetheless, the viral video shows that not even membership and upper-class structures impede racial bias and discrimination.

Many of the tweets have called for Bloom’s employer, Sonoco, to fire him. According to a Facebook post shared on Friday, Sonoco stated, “The employee involved is no longer employed by the company in any respect.” The statement also apologized to Edwards and her family.

We are aware of a terrible incident involving the actions of one our employees outside of the workplace. The…

Bloom has also resigned from both of his positions with the homeowners association, with an association statement apologizing to people who “were directly hurt by these actions.”

John Vermitsky, an attorney representing Bloom, told the Journal that Bloom had approached Edwards because another community member approached him about whether Edwards was a community member. Vermisky said Bloom called the cops to prevent the situation from escalating after he asked for Edwards’ ID.

“In confronting and calling the police on one of our neighbors, the pool chair escalated a situation in a way that does not reflect the inclusive values Glenridge seeks to uphold as a community,” the association statement reads.