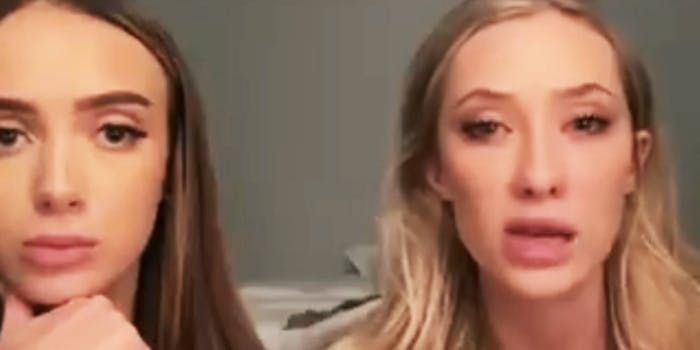 She responded to the accusations in a series of videos.

Kaylen Ward, known more colloquially as the “Naked Philanthropist,” first made headlines back in January after raising $1 million to combat the Australian wildfires—by exchanging nudes for donations. However, Ward is now facing accusations of pimping and sex trafficking over a would-be reality TV show casting call.

On Monday night, Ward tweeted that she was looking for girls with little to no sex work experience who were interested in getting started. “You will live in a mansion with approximately 15-20 other girls and will be trained on how to be successful on OnlyFans and social media,” she wrote. “We will also be filming for TV and [YouTube].”

“Comment below if you want an application to be cast for LA Dream Girls,” she added in a subsequent tweet.

Her original tweet quickly went viral as many pointed out the apparent shadiness of the request, and she later deleted it. But, as they say, Twitter came prepared with receipts.

“Unironically hoping the fbi or somebody is keeping tabs on this because this is insanely sketchy/predatory and quite possibly a front for human trafficking,” Twitter user @goodbeanaltalt wrote. Others posted screenshots of Ward’s tweets.

this is a pimp yall https://t.co/DJaUrqYbDd

she deleted it but the internet never forgets https://t.co/q4Upz4TxWf pic.twitter.com/xka5PadgwO

unironically hoping the fbi or somebody is keeping tabs on this because this is insanely sketchy/predatory and quite possibly a front for human trafficking https://t.co/kae2lNbmF9

In response to the backlash, Ward recorded a series of videos defending herself alongside an unidentified young woman.

“I am not upset that anybody’s asked me questions. I understand that I didn’t provide all the information,” she says in the video. “There’s a lot that goes into it. I’m actually trying to start a legitimate business. I will have an HR team. I will have like, contracts. I will have actual employees.”

“All the girls will be employees, they will get paid, they will have contracts,” she continues. “And there’s a lot of work that goes into it besides just moving a bunch of girls into a house.”

She added that she didn’t know how to express all of that in one tweet, and was simply trying to “start somewhere” by putting her idea out into the world.

“I don’t appreciate being attacked,” the influencer adds in a second video. “And it’s really hard to be able to express myself when I’m getting hate from all directions. So, if you have any questions please feel free to ask me, but I just want everybody to know like, these are not my intentions.”

Ward reiterated her position in a follow-up tweet, admitting that she probably pulled the trigger on her idea too soon but that “it was just something that [she] was really excited about doing and wanted to share.”

I understand that I presented my idea way too soon before I was able to present all of the information and logistics, it was just something that I was really excited about doing and wanted to share with you guys.

The last time the Naked Philanthropist went viral was just a few weeks ago when she became embroiled in an online feud with Kent State’s “gun girl” Kaitlin Bennett. True to form, Ward offered free nudes to anyone willing to block and report Bennett on Twitter.

Her offer was subsequently removed, however, most likely because it was in violation of Twitter’s targeted harassment rules.