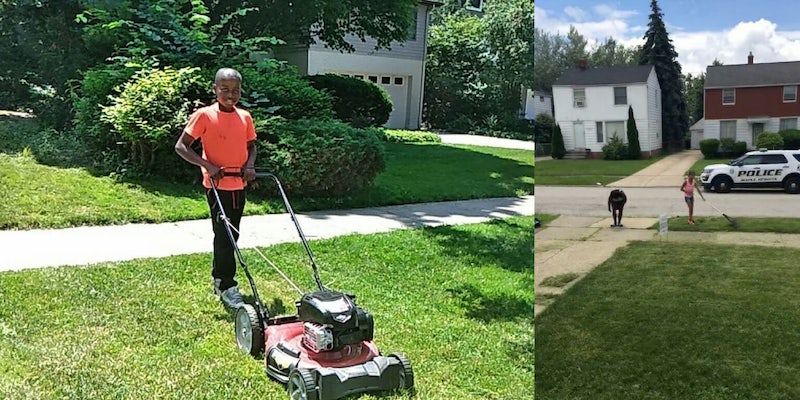 He responded with purpose.

A Cleveland-area 12-year-old’s lawn business is booming after white neighbors called the police on him and his team last week for cutting into her lawn while taking care of the lawn of the woman next door.

According to BuzzFeed News, Reginald “Reggie” Fields, his 9-year-old brother Jerron, and his 11-year-old cousins, who are Black, were mowing the lawn of Lucille Holt and sweeping the grass clippings when Holt’s next-door neighbor, a white woman, called the police on them for cutting her lawn.

Holt told the publication that she had seen Fields and his family members in the parking lot of a Dollar Tree with their equipment, including a lawn mower, gas cans, brooms, garbage bags, and rake. After hiring them, Holt went on Facebook Live, praising the children for their work.

“Our babies are out here doing the right thing, God bless them,” she said during the livestream.

However, less than half an hour later, Holt started another Facebook Live video, which showed a Maple Heights Police Department vehicle pulled up in front of the house. Holt said that her neighbor, who is white, had called the police on the children for moving the portion of her lawn connected to Holt’s. In the video, Holt said that those neighbors had called the police on her multiple times, including times when other children were throwing snowballs—she told BuzzFeed News that she estimates the neighbor called police on her six times since she moved there in October.

“Who does that? … They should be glad the kids out here aren’t breaking their car windows … After this 9-year-old just got killed? Like, love out loud, baby,” Holt said, referencing the death of Saniyah Nicholson, who was fatally shot last month while sitting in a car as two gang groups had shot at each other. In the video, Jerron then tells Holt that he knew Nicholson, and had gone to school with her. The video then shows a police officer attempting to talk to Holt, saying he wants to move them somewhere else so he can ask her questions without her and her neighbor getting into an argument.

The white neighbors, who spoke to the New York Times, said they didn’t call the police on the children because of their race, but because they wanted to tell Holt to tell the children to stop cutting their grass. However, they said their relationship with her had soured so much that they could only speak to her via the police.

“The police were not called on the young boy—the police were called on the garbage I have next door,” Linda Krakora told the Times. “We called the police to ask the woman to have the kids stop mowing on our property because we can’t talk to her … I don’t have an issue with color or I would have moved years ago.”

The Krakoras’ phone call to police, however, comes on the heels of months of high-profile cases of white people calling the police on Black people for no serious reasons and for attempting to police Black people themselves, such as for selling water on the street, for barbecuing in the “wrong” area of a public park, and attempting to use the restroom at a Starbucks. These are only a few instances of racial discrimination caught on tape in recent history, though they do capture concern regarding senselessly drawing police attention to Black people and people of color.

The video of the incident, which occurred on June 23, has been viewed more than 564,000 times and shared thousands of times. Viewers have commented additional thanks and support to Fields and Holt herself, stating they’re going to join Holt on her porch and sharing their disbelief that someone would call the police on children for cutting grass.

“Dear Reggie and crew, thank you for doing good things. Thank you to your mom for teaching you good things,” one commenter shared.

However, Fields hasn’t let the negative attention bring him down, and is using his viral story to expand the family business. Since Fields and his family had the police called on them, Holt has also started a GoFundMe page for the business, which has garnered more than $36,000 over the past two days. Fields has also started a Facebook page of his own to advertise his services, calling it “Mr. Reggie’s Lawn Cutting Service.”

Brandy Marie Fields, Reggie’s mother, told BuzzFeed News that the overwhelming response to Holt’s video has surprised her. While her son had originally wanted to cut grass to earn some pocket change for candy, he’s started the business and has hired his family members to hand out fliers. Now, the 12-year-old wants to cut grass, rake leaves, and blow snow from yards all year, she said. Even the police department has reached out to the family, wanting to pass along the messages it’s received for the child, sharing support for his efforts.

“He reads all the comments [on his Facebook page]. He doesn’t have any negative comments on there,” Fields’ mother told BuzzFeed News. “He reads them and he’s like, ‘Mom they’re inspiring me to do better and to keep on doing what I’m doing.'”