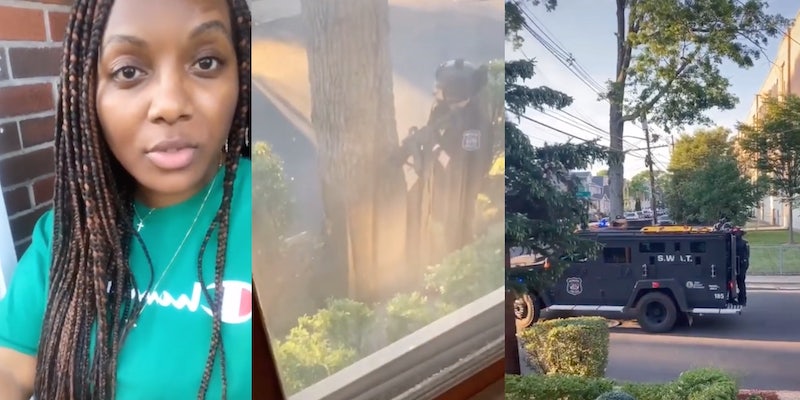 A man claimed the house she purchased was his 'ancestral home.'

The past few days have been absolutely wild for New Jersey resident Shanetta, or @regblackgrl, whose bizarre standoff with Moorish Sovereign Citizens has gripped audiences on TikTok.

Shanetta began posting videos to her account on June 18, showing the Newark, New Jersey SWAT team pulling up to a home adjacent to the one she was recording in. She explains in the video that the cops are pulling up to the home she owns, as she waits inside her neighbor’s house. Her first two videos documenting the SWAT raid have over 325,000 views.

“[A man trying to take her home] basically changed the locks yesterday and he moved in,” Shanetta says in the video.

In her series of videos about the incident, which includes a 49-part “story time” explanation of events, Shanetta says that a small group of men broke into her recently purchased house while she wasn’t there, sawed off the locks, and changed them—claiming the property as their “ancestral home.”

She was not in the house during the intrusion because she has been living in a separate apartment while renovating her new house. She discovered the attempted theft of her home when she went to get her gas lines fixed and found that her keys didn’t work.

In May, she received two “legal notices” printed on what she said might be “copy paper” claiming that the home she had purchased was being claimed by someone with connections to the Moorish Sovereign Citizens. The letters apparently said she would have to surrender her home.

According to the Anti-Defamation League (ADL), Moorish Sovereign Citizens are part of an extremist group that emerged in the ’90s, combining the Sovereign Citizen movement with ideas attributed to the Moorish Science Temple. ADL states that common beliefs among the group include special rights because of a 1780s treaty with Morocco and that African Americans were indigenous to the Americas—hence the claim of an ancestral home in New Jersey.

Shanetta said she took the letters to her lawyer, who said they had no legal bearing and that she could ignore them. Essentially, they believed the whole thing was a scam. Because Shanetta has the house title and insurance, they shrugged it off as no big deal.

In her explanation of events, Shanetta said the police responding to the incident were initially treating the man occupying her home as a squatter, which she says isn’t true. Under New Jersey property law, someone can only claim squatter’s rights if they have been living in a dwelling for a minimum of 30 years and have paid five years of property taxes. In New Jersey, squatters can only be removed by the legal process of eviction.

She said that while the house is being prepped for renovation, she has been walking the property a few times a week. He couldn’t have been there for more than a couple of days, she said.

When confronted by responding officers, Shanetta said the group of men presented documents similar to what she received in the mail, claiming that the house was the occupying man’s ancestral home. The sergeant on-duty called the documents “bullshit,” Shanetta said, with the tell-tale sign being that the public officials addressed in the papers had been out of office for some time. The man claimed to be a Moorish Sovereign Citizen, and said that he was not subject to local or federal law.

“It took a good 30—almost 40 minutes of negotiating to get him out because he just wouldn’t come out,” Shanetta said in a video. “The neighbors said that they could see him walking to and fro in the house, looked like he was on his cell phone talking to somebody. But he would just sit. They would say, ‘hey, we need—they kept saying something like ‘we cannot see your ID, you’re going to have to come out of the house and show us.”

The man was ultimately removed from the home, Shanetta said in her series, and the locks were changed.

“He would just go back and sit on the landing that leads to the second floor,” Shanetta continued. “So [the police] finally break the door in, which to my surprise, they did not do that much damage to the door frame. I was able to get another locksmith. They ended up basically having to carry him out like a piece of plywood, because he was laying flat… he would not walk out at all. I think three or four men just carried him out like they were carrying out a piece of sheetrock.”

According to Shanetta, the police took the man away in their cruiser. She said that she still needs to go to the station to file charges against him which apparently include criminal trespassing, terrorist threats, falsifying documents, and burglary. The Daily Dot has reached out to the Newark Police Department.

Update 11:09am CT June 27: In a statement to the Daily Dot, Shanetta said that it’s important for people to know what squatters rights are in their municipalities in case something like this ever happens to them. She also shared other lessons she learned from the rare experience:

“I would say do not respond to any notices. Call your attorney and call your title company, and then contact your local police department if you do get something like that. And the third thing I would say is if you do happen to show up to the house, and there is someone in your house already, don’t engage them. Just call the cops.”

Now that she has regained control of her house, she said she’s moving forward with the renovations.

“I’ve designed it from top to bottom,” she told the Daily Dot. “I’ve chosen all of my finishes, every single thing that I like about it. I picked my wallpaper, my paint colors. I’ve designed what the landscaping is going to look like. I think that’s what’s so cool about it. And that’s why I wanted a fixer upper because I did at some point want to have an interior design like role job and housing or staging. And I basically get to do that for my house. Like from top to bottom. It’s all me. ”