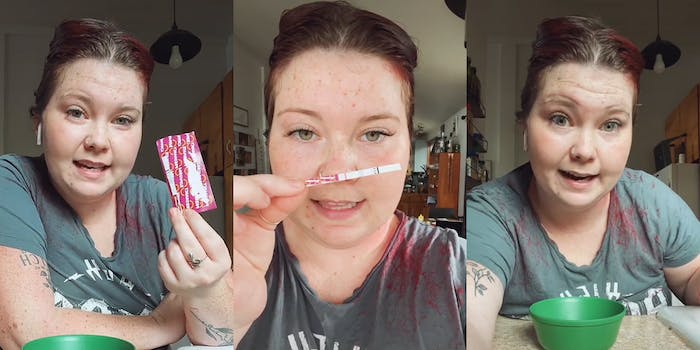 ‘So sad that this is our reality’: Woman says to take pregnancy test every four weeks in the wake of Roe v Wade overturn, sparking debate

A woman went viral after she encouraged women to take routine pregnancy tests once a month.

Nicole (@ariesred_nic11) describes herself as a “pro-choice/human rights activist” and is going viral for encouraging women to take pregnancy tests every 30 days so they could have enough lead time to decide whether or not they want to stay pregnant and carry a child to term.

In the trending clip, she stresses that this practice can help a lot of women in “red states” where legislation on abortion after Roe v. Wade was overturned limits access to the medical procedure.

So why one month? As many states have adopted similar rulings to the Texas Heartbeat Act, which stipulates that if an embryo has a heartbeat, which usually occurs anywhere from 5 to 6 weeks, abortions are off the table. Women will have to travel out of state in order to obtain an abortion or be forced to carry the fetus to term.

Nicole advocates for monthly pregnancy tests in several TikToks and shares helpful information, like where to buy bulk pregnancy strips at a discount.

“Start normalizing taking pregnancy tests every four weeks so that if you do get pregnant…” she says at the top of the video, which is stitched from a previous post. The TikTok then cuts to Nicole standing in front of a bowl, strip in hand yet again, ready to take an additional pregnancy test.

“It’s that time of the month again let’s take another pregnancy test with my infamous green bowl that you guys are still freaking out about. A ton of people on the last video were saying that they can’t afford pregnancy tests once a month…these guys are on Amazon, they’re the Pregmate it’s just the strip and you get 50 of these guys for 17 dollars when it’s all said and done.”

The clip then transitions to her checking the pregnancy test on camera to see the results. “Okay let’s go ahead and do it. Remember we’re taking a pregnancy test every single month even if we’re on birth control, especially if we’re in red states, so that if we do get pregnant and we don’t want to be we still have as many options available to us as we possibly can.”

One user commented, “This is a really good idea actually.” Another said, “This is so sad.”

Others praised Nicole’s message and said that they intentionally share and like the clip even if they aren’t currently living in America, so as to help as many people as possible.

One user wrote, “It’s so sad that this is our reality now but I love the message.”

Another TikToker commented, “As a European I’m watching, liking, sharing, commenting so this hopefully ends up on even more people’s fyp.”

And then there were those who were grossed out that she peed into a green bowl to take the pregnancy test, instead of just free-streaming on the strip over a toilet, remarking, “IS THIS PEE IN THE BOWL?”

In the aftermath of Roe v. Wade being overturned, it didn’t take long for horror stories to circulate the media of individuals who have suffered at the hands of the Supreme Court’s decision, like a 10-year-old rape victim in Ohio who was denied an abortion as a doctor detected fetal cardiac activity.

The Daily Dot spoke to Nicole on Instagram, who said she’s been receiving a lot of inquiries on emergency contraception: “I think more education around plan b pills is super important right now I’ve been getting tons of questions about it.”