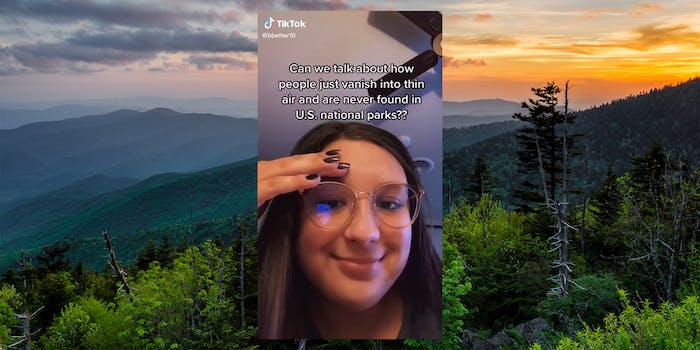 ‘I am not afraid of the park. I am terrified’: TikTokers are freaking out over just how many people are disappearing in national forests

In a viral TikTok video from May, Becca Goldman, @bbetter10, explains the global trend of missing persons inside heavily forested areas around the world. The video has more than 14.3 million views.

Now, she’s diving deep on the subject via a new TikTok series.

According to Outside, 1,600 people are currently missing within U.S. public lands. But Goldman alleges that this number is much lower than the reality as so many cases have not been publicized.

“We’re not seeing it in the news because it’s not really being talked about much at all. Why would they tell you? It would just be another thing that you’d be afraid of, and they want your money to go into the national parks so that you pay the fees to go and camp and hike,” Goldman told the Daily Dot.

According to the New York Post, 600,000 Americans go missing every year but 92% are found, dead or alive. However, notes the Post: “[H]ow many of those disappear in the wild is unclear. Neither the Department of the Interior, which oversees the National Park Service, or the Department of Agriculture’s US Forest Service keeps track.”

In 2017, as Strange Outdoors notes, there were more than 4,000 search and rescue incidents reported in U.S. National Parks.

As a fan of the national parks herself, Goldman hopes that by talking openly about what is going on inside the parks, more people will understand how little is known about what happens deep inside the forest even within the United States.

“I just want to say that I am not trying to derail the conversation about how scary the U.S. national parks are, because they are, but this is not a U.S. problem. It is a global problem. We have no idea what exists inside heavily wooded areas,” Goldman explains in her viral TikTok.

Goldman continues by telling viewers of her experiences traveling in Australia and the Philippines, coming across tribal groups that live far from any neighboring cities or towns.

“We had been in the middle of nowhere for awhile and a person completely naked sprinted across the road in front of us. This person was pale white and blood red eyes. We don’t know what’s out there,” Goldman said.

Goldman told the Daily Dot she was completely surprised by her success on TikTok as she started on the platform making content for her friends and family, but felt this was a topic that more people should know about.

In response to the video, many viewers were shocked by how little is known about forests around the world, similar to the oceans, as so much of the topography much has yet to be explored.

“I’m from Washington!! We were taught young to respect the forest and ocean cause you never know what you’ll run into out there,” one user commented.

Indeed there is no comprehensive list of all persons who have gone missing inside the National Park System, according to National Parks Traveler.

Retired police officer David Paulides reportedly submitted a Freedom of Information Act request to obtain the National Park Service list of unsolved missing person cases for his book on stories of missing persons and was told he would be charged $1.4 million in fees, according to National Parks Traveler.

Viewers on TikTok were excited about the series and encouraged Goldman to create a podcast where she could go into depth about each story in a longer form, as TikTok creators are limited to three minutes per video.

The National Park Service did not immediately respond to the Daily Dot’s request for comment.