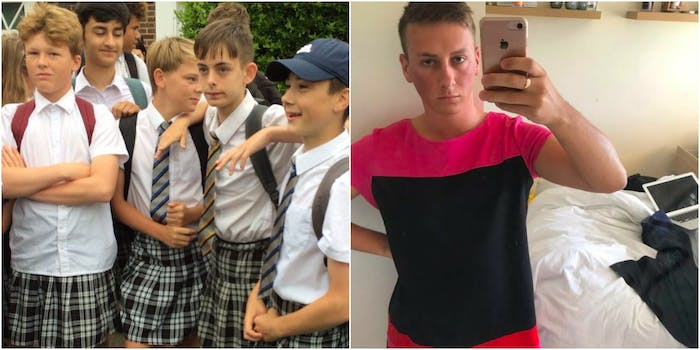 The boys stand in a semicircle, some with arms crossed in front of them, others hamming it up for the camera, a mix of defiance and self-consciousness, their knobby knees showing just below the hems of their pleated plaid skirts.

You’ve probably seen this photo by now because it went viral earlier this week. The boys, students at Isca Academy in Exeter, England, showed up to class wearing skirts to protest their school’s dress code during a heat wave. Currently, the school allows only pants for boys, while girls have the option to wear pants or skirts.

In light of the publicity, Aimee Mitchell, the school’s headteacher, released a “hot weather statement” announcing minor amendments to the dress code, including official clearance for students to “undo the top button of shirts.” But for now, she made clear, shorts were still a no-no:

“We recognise that the last few days have been exceptionally hot and we are doing our utmost to enable both students and staff to remain as comfortable as possible. Shorts are not currently part of our uniform for boys and I would not want to make any changes without consulting both students and their families. However, with hotter weather becoming more normal, I would be happy to consider a change for the future.”

The Isca Academy story came on the heels of another man in the U.K. making headlines for a grown-up version of the same problem, during the same heat wave. After being sent home for wearing shorts, which are not allowed by his office dress code, Joey Barge returned to work wearing a leg-baring dress, an approved option under the women’s dress code. Shortly after, his office announced that men would now be allowed to wear shorts after all.

These stories drew a lot of attention for their novelty factor (haha! a guy in a dress! why is this still funny!), but they also serve as illustrations of two inconvenient truths: 1) gendered dress codes are sexist and outdated; and 2) global warming will kill us all, but before it does, it might force us to challenge some long-held assumptions about gender roles.

So hey, you win some, you lose some.

Let’s start with the basics: It’s horrifying that the ice caps are melting, and it’s frustrating and unfair that boys often don’t have the option to wear something cooler as temperatures continue to rise. Boys should be able to wear shorts in hot weather—as should girls. But boys should also be able to wear skirts and dresses, and not just as a cheeky form of protest.

Gendered dress codes put schools and offices in the uncomfortable and completely inappropriate position of forcing their students and employees into the gender binary and then enforcing their presentation accordingly. For trans students and non-binary students, gendered dress codes add unnecessary levels of stress and create an environment where the policing of gender roles is not only accepted but encouraged. When the idea that it’s shameful or wrong for boys to wear skirts is codified, it underscores many dangerous beliefs about gender roles.

Everyone thought it was cute and thought-provoking when a group of boys showed up in skirts to make a point, but you can bet that a trans girl showing up in a skirt would face a very different reaction. What does it say when a company’s response to these protests isn’t, “OK, you can keep wearing the skirts”? Instead, it’s “Fine! We’ll consider allowing shorts. Now please, take off the skirt and stop making a fool of yourself.”

We also can’t address the boys-in-skirts controversy without acknowledging that young women have been pushing back against gendered dress codes for years, drawing attention to the sexist ways the rules are often written and enforced. It’s 2017, and it’s still not uncommon practice to send a girl home from school because her clothing choices are “distracting” her male peers. Clearly, gendered dress codes are a problem and have been for a long time. And yet, the tipping point in this debate isn’t concern for girls’ constant sexual objectification, but the realization that boys’ legs are too hot in pants.

Feminists and people of color know this story all too well: They spend years (generations, even) working hard to draw attention to issues of injustice, in all sorts of brilliant and nuanced and creative ways, and are largely ignored. But when a white dude says, “Hey, maybe institutionalized sexism and racism really do exist,” he is lauded as a revolutionary thinker.

Facts: The earth is hot and getting hotter. Girls are sexually objectified constantly. Boys are uncomfortably hot in pants (as are girls). The gender binary is reductive and dangerous.

We’re all going to be swallowed by the sea eventually. In the meantime, let people wear what they want.