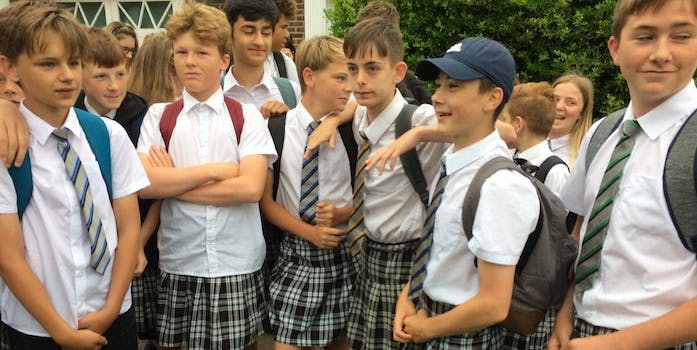 They couldn't bear the heat, so they bared their legs instead.

Looks like the hottest, er, coolest articles of clothing this summer for England boys and young men alike are actually dresses and skirts.

After one U.K. man wore a dress to work to protest a pants-only policy that prevented him from wearing shorts, a group of boys from a school for ages 11-16 in Exeter, England, have followed suit in their fellow students’ skirts.

According to BBC News, about 30 boys from the ISCA Academy wore skirts to school on Thursday after being told they weren’t allowed to modify their uniforms with shorts.

Boys at Isca Academy in Exeter wear skirts to school in protest at not being allowed to wear shorts in hot weather. pic.twitter.com/XHrffnSQEN

One anonymous mom with a son at the school told Devon Live that he wanted to show up to school in shorts because of the heat, but was told he would be put in an isolation room for the rest of the week.

“The weather has been so hot recently and it’s got to the point where my son is suffering,” another parent, Claire Reeves, said to Devon Live. “The girls are allowed to wear skirts all year round so I think it’s completely unfair that the boys can’t wear shorts. Boys just don’t have the option and I am just really concerned about how the heat is going to affect him.”

Boys told BBC News that they decided to stage the protest after Aimee Mitchell, the head teacher, told them sarcastically that they could wear skirts. So on Wednesday, five boys came to school in uniform skirts for female students.

“The head teacher told them, ‘Well you can wear a skirt if you like,’ but I think she was being sarcastic,” the first anonymous parent said. “However children tend to take you literally and so five boys turned up in skirts today—and because she told them it was OK there was nothing she could do as long as they are school skirts.”

While one of the first five boys did get in trouble for his skirt being too short, the protest grew to 30 boys literally skirting the uniform policy the next day.

Most tweets supporting boys at Devon school wearing skirts to lessons in protest at not being allowed to put on shorts in heatwave. pic.twitter.com/POWm2oTUVj

The boys said they hoped their uniform change would push the administration to reconsider the shorts ban.

“We recognize that the last few days have been exceptionally hot and we are doing our utmost to enable both students and staff to remain as comfortable as possible,” Aimee Mitchell, the head teacher, told BBC News. “Shorts are not currently part of our uniform for boys and I would not want to make any changes without consulting both students and their families. However, with hotter weather becoming more normal, I would be happy to consider a change for the future.”