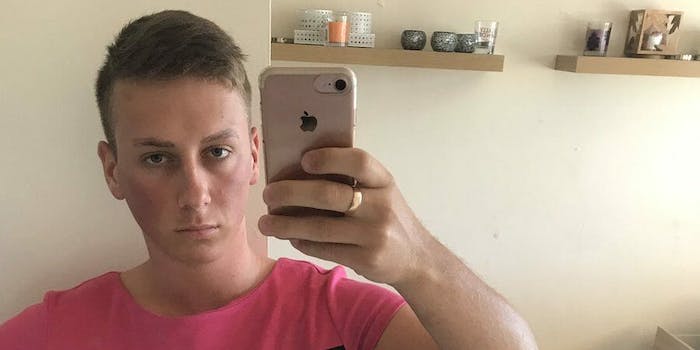 Skies out, thighs out.

Shorts: Not just for “flaunting” legs, but a practical article of clothing. One brave man set out to make this point on Monday by wearing a dress in protest of his work’s anti-shorts stance.

According to the Daily Mail, 20-year-old Joey Barge from Buckinghamshire, U.K., was sent home from work after showing up in shorts. They appear to be relatively modest, per the photo he tweeted out, but even though Britain was suffering through a heatwave, the shorts just wouldn’t do.

If women can wear skirts/dresses at work can I wear smart shorts like so? pic.twitter.com/UD0AQ6ZCbP

So Barge did what any other logical man would do in that situation—he referenced the dress code for women in the office, noted that they’re allowed to wear dresses, and applied that information to himself liberally.

Sure, Barge isn’t a woman, but if his female counterparts could stroll the office legs unleashed, why were shorts such an issue for men? He was using the dress to make a point, and that point he made.

When he showed back up at the office he was sure he’d be sent back home again. However, his employers noted the unfairness of their pants-exclusive policy for men. Instead of going home to change again, Barge opted to say yes to the dress.

“They said it was a bit too colorful and asked if I wanted to go home and change because they were letting us wear shorts because of my ‘protest’—but I said I was happy to stay,” Barge told Daily Mail.

Congrats, young office bro. Looks like “skies out, thighs out” wins this time around.