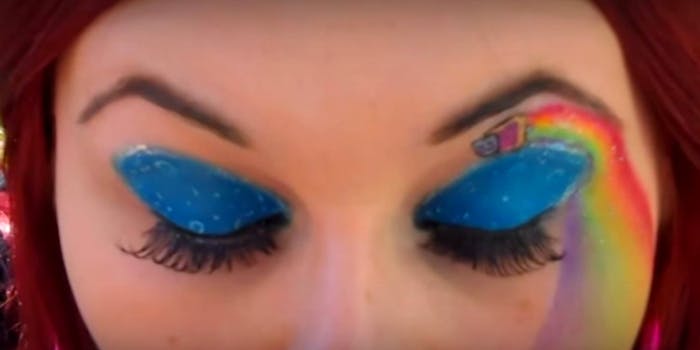 5 Halloween makeup tutorials for the Internet’s most infamous memes

Scare all the children with your best Troll Face.

Halloween is fast approaching and while meme-themed costumes are plentiful, what if you want your face to say it all? We have you covered: Here’s five YouTube makeup tutorials for the Internet’s favorite memes. With just a little bit of makeup, these how-tos will transform you from a boring commoner to an Internet sensation.

How to turn "@netflix and chill" into a funny and easy Halloween costume: https://t.co/nOhwcSEwhq pic.twitter.com/jWAlMSHqmJ

Yes, we are all getting sick of Netflix and Chill. Alas, this makeup tutorial will have you looking so sexy that you won’t even care that people are over you.

The next emoji update needs to include trollface. Major oversight this time around. pic.twitter.com/ZxLJlk893c

Want to troll your friends IRL? Then we have the perfect makeup tutorial to do it! You can say “U mad bro?” without saying a word.

So, you aren’t a Pop-Tart shaped cat flying through space. Sad for you. With the help of this makeup tutorial, you can experience the same weightless joy of soaring through the atmosphere…or just looking pretty darn cool.

A rare wild pumpkin pepe appears. You have 10 seconds to RT or you will be unlucky for the rest of your life pic.twitter.com/54cIo92piD

Are you a Pepe or a rare Pepe? Either way, this tutorial will help you to embrace your truest, rarest Pepe form.

No one should by grumpy on Halloween, but if it works for President Obama, it works for us! This Grumpy Cat makeup tutorial will have your friends purring with delight…or disdain. It is hard to tell really.

Happy Halloween! Be safe, be smart and have fun—we meme it!