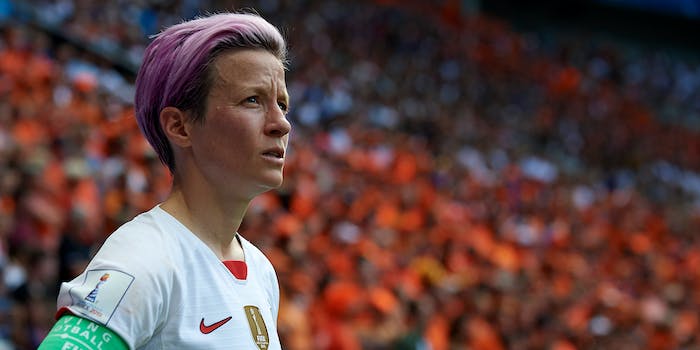 The tweet was directed at fellow soccer player Natasha Kai, who is Asian.

Megan Rapinoe, one of the most outspoken as well as decorated members of the U.S. women’s national soccer team, is under scrutiny and even facing cancelation calls after a decade-old tweet of hers was unearthed.

The tweet, still up on Monday morning despite the backlash surrounding it, was directed at fellow soccer player Natasha Kai, who is Asian.

“u look asian with those closed eyes!” Rapinoe wrote in May of 2011 in response to a now-deleted tweet.

Some on Twitter saw the tweet as mocking Kai and being hypocritical given Rapinoe’s advocacy. In addition to being one of the highest-profile American LGBTQIA athletes, Rapinoe’s current Twitter avatar is a Black Lives Matter logo.

One person took the opportunity to share an opinion as to “why so many extremely woke people turn out to have been bigoted in the past.”

Another commenter contributed with a screenshot of the tweet, saying, “Screenshot. Never forget.”

Some Twitter users, like Erkut_Denizer, went as far as calling her a “racist” and ordering her to “get cancelled.”

And several tried to pull sponsors into the mix—Rapinoe has recently appeared in Subway commercials and is set to do the same for Victoria’s Secret.

“I guess @SUBWAY agrees with this racist statement, they hired her and obviously have no problems with her disrespecting the flag and now Asians,” one person observed, “I’m an asian, American [sic] and that’s just not even funny.”

One critic, linking to a right-wing blog putting “woke” in quotes to describe Rapinoe, wrote, “Looks like the new face of Victoria’s Secret, Megan Rapinoe, mocked Asians. If true, definitely sounds anti-Asian to me. Is this who @VictoriasSecret wants to be associated with? Can’t be that great for it’s [sic] brand.”

Another asked, simply, “Does @VictoriasSecret stand for anti-asian hate???”

But Rapinoe also had her defenders on Twitter, with a number of those pointing out how long ago the tweet was up. One even pointed out that it was old enough to have been composed on a Blackberry back when those devices were all the rage.

Another person observed, “So disgusted with all those backlashes. Just because Megan is now openly speaking own opinion against discrimination. 10 years apart from this tweet and I reckon majority of those jeers are to damage Megan’s contribution, reputation or being an icon.”

Another noted, “I am Asian. I don’t feel offended by this cuz we all know what Megan has done and who she is. She is not cancelled and she is very much welcomed. Can’t wait for her VS ads.”

While Rapinoe hasn’t responded to the current controversy online, she did generate some on her own Thursday with her tweet about the Victoria’s Secret campaign. She tweeted, “I am excited and ready to partner with @VictoriasSecret as part of #TheVSCollective – women who I admire and are icons of our time. I’m looking forward to working with them to show ALL women their individual and collective beauty and power.”

But as one respondent pointed out–countering those lauding the move as progressive and welcome—”I love you and understand you are making a living. But ugh Victoria’s Secret. How many girls have looked at those airbrushed pics and felt less than?”

The Daily Dot has reached out to Megan Rapinoe’s team.