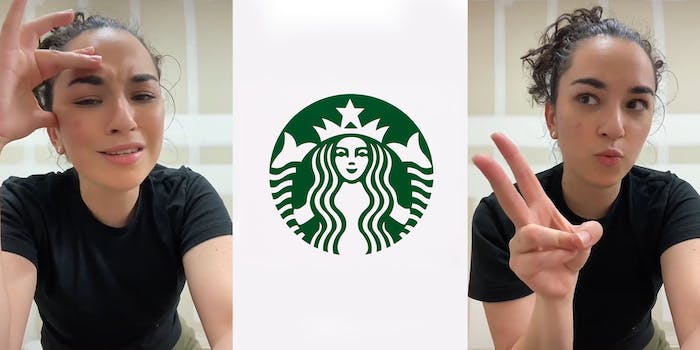 ‘It was 2 cars in a row’: Starbucks worker complains about customers asking to swap out meats on breakfast sandwiches

In a viral TikTok, a Starbucks barista complained about customer requests to swap ingredients on pre-made breakfast sandwiches, sparking debate.

The viral video, which has over 46,300 views, was posted last week by Starbucks barista and TikToker Danielle Sanchez (@thehighbarista). Sanchez regularly makes videos about her experience as a barista and has over 10,600 followers.

In the video, Sanchez films herself describing a situation she faced at work in which multiple customers asked to swap ingredients on Starbucks’ pre-made breakfast sandwiches.

“I need to know which Starbucks baristas are replacing the meats on the sandwiches. I had two different customers today ask if they could swap the sausage, egg, and cheddar—the sausage on there—for bacon. Like it was something that we would normally do. So whoever’s allowing this, please don’t,” Sanchez criticized.

“Weird customer request…It was two cars in a row and it confused the hell outta me,” she captioned the video.

Starbucks, the mega-popular coffee chain with over 30,000 stores globally, offers snacks and sandwiches alongside its beverage menu. While the Starbucks online ordering portal does allow requests to remove egg, cheese, or meats from breakfast sandwiches, it does not allow users to add or swap ingredients.

“Lol seriously, I mean I’ll do it but I tell them they gotta buy both sandwiches,” one user commented.

“I’m not taking apart a sandwich they didn’t pay for,” another responded.

Other users were confused that baristas were seemingly confusing customers by providing swaps.

“I’ve had people come to our store too and then say we’ve done it before and like no one would do that!” one TikToker described.

Another user thought other Starbucks baristas might not be the ones causing confusion, instead it might be customers assuming Starbucks can fulfill these types of requests like other chain stores.

“I just think they assume it’s like McDonalds,” the user explained.

Other internet users have discussed these impossible ingredient-swap requests before. In one Reddit thread posted in October, other alleged Starbucks employees complained about customers being confused or frustrated they couldn’t add ingredients.

In November, another TikToker sparked debate after saying it’s possible to modify Starbucks breakfast sandwiches. In the comments and a follow-up video, the TikToker clarified the Starbucks ordering computer system does in fact allow modifications on sandwiches, just no swaps or ingredient additions.

The Daily Dot reached out to Starbucks via email and Danielle Sanchez via Instagram direct message.