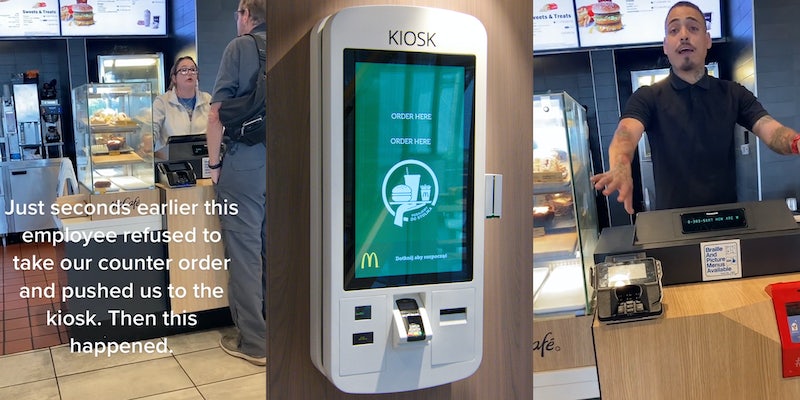 ‘We don’t have enough staff to do front counter’: McDonald’s manager sends employee home after she sent customers to order at kiosk

'IDK bout u but I’d rather order at the kiosk anyway.'

A viral video shows a confrontation between a McDonald’s customer and an employee who redirected them to use a kiosk to place an order, allegedly resulting in the employee being sent home.

By Thursday, the video shared by @lovesd4rkness had 690,000 views on TikTok.

The video starts as the cashier is serving a different customer after directing the TikToker to use a digital kiosk to place their order. The TikToker then tells the cashier that it doesn’t make sense to direct one customer to the kiosk and not the other.

The employee responds by saying that they are being trained to direct customers to the kiosk when they are busy. The TikToker explains to the cashier why he thinks that’s wrong, which is when a manager walks past, asking if everything is OK.

“We came in and wanted to come up to the register and place the order, but she said no, we’re not doing that anymore, she chased us over to the machines,” the TikToker says. “Not even five minutes later she accepts the first customer that walks in and we just got done with the order. It’s kind of messed up.”

The manager then apologizes on behalf of the cashier as he directs her to somewhere else in the restaurant, while the TikToker continues explaining why he thinks he should have been served by the cashier.

Some viewers sided with the TikToker, pointing to the inconsistency of directing one customer to use the kiosk and not the other.

“The manager handled it well,” one commenter wrote. “The employee should’ve directed the other customer to the kiosk too. Keep it consistent.”

“The people saying that they’re siding with her bc McDonald’s pushes kiosks….you treat customers equally,” another commenter wrote. “That’s not the right way to go about it.”

“But I mean I’d be upset too if I was in their shoes,” a commenter wrote. “Screw that lady because she’s picking and choosing who to serve. Love that manager at the end.”

However, the vast majority of commenters took the cashier’s side, with many speaking as former or current employees who were asked to direct customers to the kiosks by management.

“Honestly I’m on her side,” one commenter wrote. “I’m betting McDonald’s has been pressuring them to push people to the kiosks and she’s just trying to follow instructions.”

“I personally am on her side, when it’s busy you just have to read the room and use the kiosk,” another commenter wrote. “Honestly learning to use it benefits you as a consumer.”

“Can’t necessarily blame her if she was told to do it that way,” a commenter wrote. “She’s just going by what she was told. Seems like miscommunication within the workplace.”

The Daily Dot reached out to @lovesd4rkness via TikTok comment and McDonald’s via email.