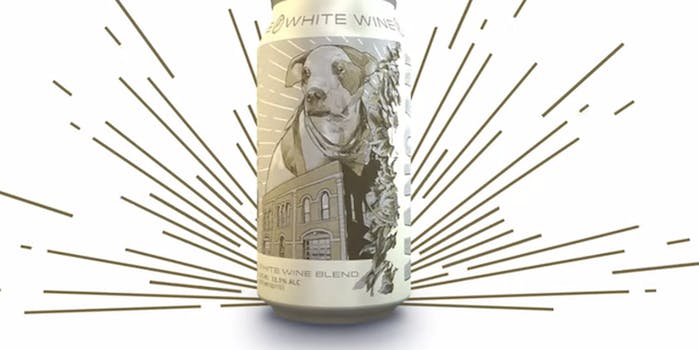 MANCAN is the manly wine that bros have been waiting for

If you’re a guy who likes wine but doesn’t want to bother with the traditional high-brow wine etiquette and girly stigmas, then there is a product just for you.

It’s called a MANCAN, pronounced man-can. It’s a beer can filled with delicious wine that you can pop open, chug down and take with you anywhere, according to an advertisement for the product.

#tbt to @passportstamp at #dolorespark enjoying a cold MANCAN WHITE. Make an excuse to picnic this weekend. #MANCAN #wineinacan

The idea started the product’s founder Graham Veysey went out to a bar and was craving some wine, but not the fancy type like Sauvignon Blanc or Pinot noir, according to the product website. Graham just wanted wine made simple, without the crystal glass and the hassle of being at a sit-down restaurant. He looked over at his friend with a beer can in his hand and got an idea. That night, MANCAN was born.

“Thought up by a guy who lives in a old firehouse, walks to work with his dog, has two bikes and a trike and wanted to move beyond stemware. At MANCAN we believe wine is for drinking, not for pairing. And our notes are more rock than classical. Crush one at the game, throw one in your back pocket on a camping trip or pop one open at your favorite dive bar. In every MANCAN you’ll find the most refreshing and smooth wine, crushed from California grapes, canned in Sonoma county and meant just for you. We know our wine taste great. We just don’t expect for you to talk about the aromas.”

The wine comes in three flavors: red, white and fizz. According to i100, you can purchase a 24-pack of MANCAN for $77.

Although MANCAN gets major kudos for making wine more accessible for wine lovers everywhere, their marketing strategy of appealing to the everyday man who walks his dog and likes to watch the games is not doing anything for gender stereotypes. In attempt to give its product an identity and make its product relatable to consumers it also is unintentionally playing on social constructions of masculinity—something that people across the country are working hard to fight against, especially within children’s items.

On Saturday, retailer Toys “R” Us made the bold move to drop gender-specific categories on their online website in the United Kingdom. Shoppers in the UK can now shop for products by age, group, toy and brand. The decision comes just two years after the retail giant met with Let Toys Be Toys, a nonprofit organization calling for retailers and publishers to stop promoting toys and books based on gender, according to the Daily Mail.

Last week, toy company Mattel made headlines when it unveiled its Moschino Barbie commercial featuring a boy for the first time.

The ad received praise across the internet, including support from celebrity blogger Perez Hilton.

Don't do this, @Target pic.twitter.com/cfh3cp5Nqa

On a global scale, the United Nations has taken steps to remove discrimination that occurs under the guise of gender stereotypes and has recognized the negative impact of woman gender roles. Article 5 of the Convention on the Elimination of All Form of Discrimination Against Women (CEDAW) states:

“State parties shall take all appropriate measures to modify the social and cultural patterns of conduct of men and women, with a view of achieving the elimination of prejudices and customs and all other practices which are based on the inferiority or the superiority of either of the sexes or on stereotyped roles for men and women.”