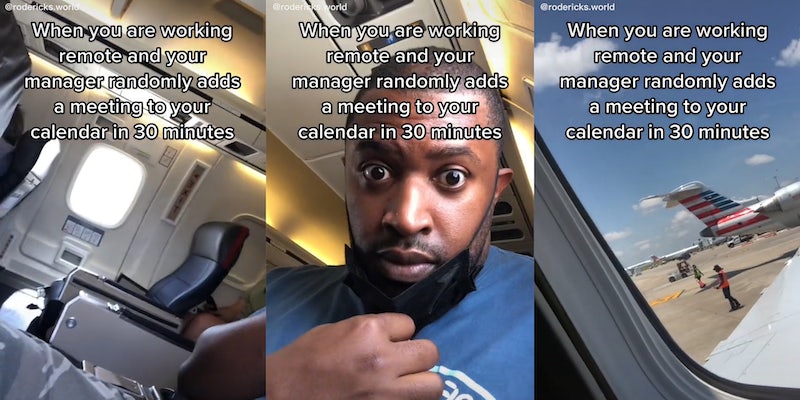 'When you are working remote and your manager randomly adds a meeting to your calendar in 30 minutes.'

A TikToker who claims he works remotely says his manager sent him an impromptu meeting invite—while he was, seemingly unbeknownst to his boss, on a plane.

Roderick (@rodericks.world) filmed himself on the plane with the overlay text reading: “When you are working remote and your manager randomly adds a meeting to your calendar in 30 minutes.”

Roderick used Lauryn Hill’s song “Ex-Factor,” specifically the “How can I explain myself?” line, to set the video.

Roderick later revealed in the comments section that he was headed to Charlotte.

The video has been viewed over 646,000 times. Viewers made their suggestions as to how Roderick can dodge the meeting.

“You gotta block your calendar off,” one person said.

Others suggested his “Wi-Fi go out.”

“That’s when the internet ‘goes out’ ’or there’s a power outage in your area,” one suggested.

“You need a portable green screen. Set it up right and anywhere can be ‘home,'” another suggested.

Roderick replied, saying, “Yes!!! I have a coworker that does this. Works every time. Lol.”

He then revealed the anti-climatic approach he landed on. “Imma just leave my camera off,” he said.

The Daily Dot reached out to Roderick via TikTok comment.