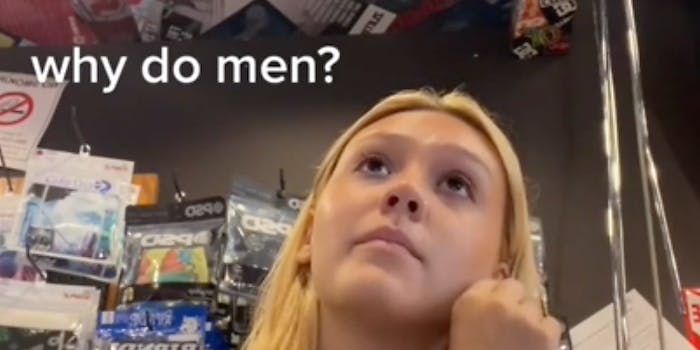 ‘I was just trying to do my job’: 19-year-old TikToker films man persistently hitting on her while she is trying to work

'It's the fact that he didn't care that you were clearly uncomfortable.'

A viral TikTok video shows a man persistently hitting on a 19-year-old girl while she is trying to work.

A college student a Kent State, Mickey Ruiz (@mickey.ruiz), filmed and posted the man’s attempt to hit on her. The video has been viewed over 6 million times. The overlay text asks, “Why do men?”

“Hey Nikki (a fake name she gave him), can you help me pick out a sticker?” he asks.

The unseen man is seemingly older because he’s trying to confirm Ruiz’s education and age. She tells him she’s a 19-year-old college student.

“There’s a city called Kent and a college called Kent?” he asks. “What is that, East Cleveland?

Instead of reading her obvious disinterest and just leaving, he persists. He takes some change out of a spare jar on the counter and tries to use the change to pay for his stickers. While paying, he asks her, “You wanna know my PIN?”

Closing the transaction, she asks, “Do you want a receipt?”

After he declines, she tells him, “You’re all set.”

She evidently could not be more uninterested, but he continues, asking if she has Instagram. Ruiz says no.

“Perpetuates some bad vibes from people,” she says.

He says “You’re cute” before comically asking, “You play hacky-sack?”

Then, the man asks about going to a beach or boating on Lake Erie, and when she says no, he just waits, saying nothing, and the video ends.

Ruiz later responded to a commenter who accused her of being stuck up. She said she was just trying to stay safe because she wasn’t sure how he “was going to respond” to her rejection. She said that’s why she still responded—”even though I was clearly uncomfortable.”

“Women don’t owe you shit. I was just trying to do my job, and this man came in asking personal questions about my life—which I am not required to give,” she says.

The Daily Dot has reached out to Ruiz for comment.