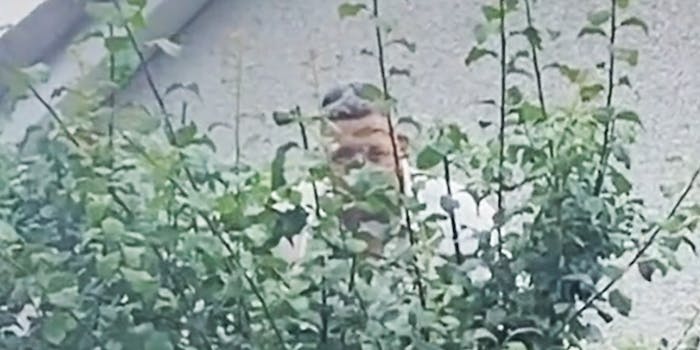 'Everyone saying to go to the cops...They won't do anything. They don't care.'

A viral video shows TikToker filming her neighbor, a middle-aged man, peeping into her house from behind a tree.

TikToker @lucy.2481 filmed and posted the video from her home in Scotland, with an overlay text that reads: “People always ask me why my curtains are always closed.”

She zooms in on the man, who is peering at her from behind a tree. He quickly hides after apparently noticing her filming him.

Predictably, scores of women in the comments section of the video detailed instances of neighbors staring entirely too long and making it awkward or even predatory. People suggested the TikToker purchase a window privacy film, pepper spray, or set up cameras. One woman said she had to get protection dogs. “I had to buy two pit bulls because my stalker is very bad. He lives seven houses away from me,” she said.

Others commented on how police seem to disregard stalking allegations and have allegedly disregarded their stalking allegations in the past. One woman wrote of calling the police on the neighbor: “Everyone saying to go to the cops…They won’t do anything. They don’t care. My male neighbour filmed my bedroom window for a month. They did NOTHING.”

Another commenter alleged: “The cops won’t do anything bc he’s not ‘trespassing.’ I had this issue and they did nothing. Had to build a tall metal fence.”

The Daily Dot reached out to TikToker @lucy.2481 for comment.