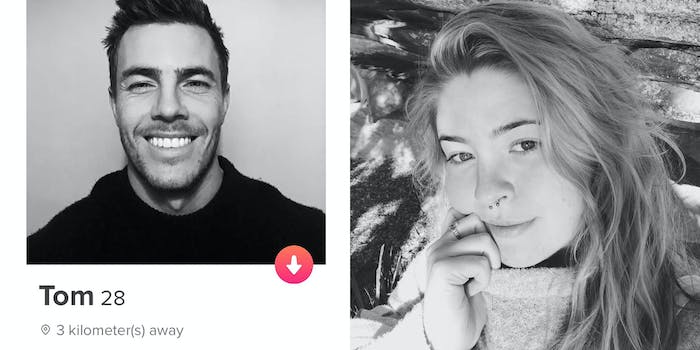 He said he 'struggles with rejection.'

An Australian man was fired from his information technology job after viral screenshots of Tinder conversations showed him harassing and threatening women, Daily Mail reports.

Ebonie Sanderson posted screenshots of her conversation with Thomas McGuirk on her Instagram. After Sanderson declined to go to McGuirk’s house for a date, McGuirk called Sanderson an “ugly, fat, time wasting whore.”

“I’m entitled to change my mind and tell someone I’m not interested anymore because I feel uncomfortable and intimidated by one’s aggressive and forceful nature,” Sanderson wrote in her caption. “The worst part about this attack, is the fact that I felt the need to be nice when turning him down, telling him he’s good looking and will find someone else for the night and then apologizing for feeling uncomfortable!!!!”

Hinds told Daily Mail that her story was extremely similar to Sanderson’s. Hinds said she spent a night with McGuirk, but when she told him she wasn’t interested in taking things any further, “he flipped the switch” and started sending angry messages.

Though the online abuse is hurtful and scary, Hinds said having strangers stick up for her was “amazing.”

According to an update from Sanderson on her Instagram account, over 20 women have come forward with a similar story about McGuirk. Eight women have spoken to the Daily Mail about their interactions with McGuirk, which all took place on the Australian East Coast.

McGuirk also made racist comments to some of the women. Beauty vlogger Jess Turunen told Daily Mail that McGuirk called her “white trash” for having an ex-boyfriend who was Black. After Turunen told McGuirk she was no longer interested in him, he harassed her on Tinder and Instagram.

McGuirk was fired from his job at Invenco and has since spoken publicly about his behavior. McGuirk told News.com.au he was “acting out in an impulsive way” because he was “hurt” and “struggles with rejection.”