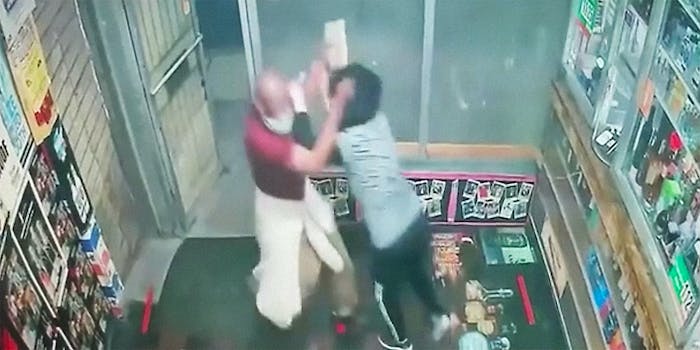 ‘We are a part of this community’: Video shows man attacking 2 older Asian women with cement block

The liquor store owners fought back.

A man has been arrested in conjunction with an attack on two Korean women inside their liquor store in Baltimore, Maryland.

Graphic surveillance footage shows one woman stepping outside of Wonderland Liquors shortly before 11pm on Monday night, only to be forced back in by a man wielding a cement block.

The two struggle and fall to the ground as a male customer who was already in the store calmly walks past them and leaves.

The man and woman fight on the ground for nearly 20 seconds before the second woman appears in the frame and immediately starts trying to help, only to be hit with the block herself.

After the man bludgeons both women with the block repeatedly, the altercation mostly continues outside of the store, largely obstructed from the camera. The women then return to the store alone, one bleeding profusely from head wounds.

Daryl Doyles was identified as the attacker and has been arrested on charges of aggravated assault, according to WJZ-TV.

According to John Yun, the women in the video were his aunt and his mother, and the latter told him she had never seen Doyles prior to the attack. It is not immediately clear if police have determined a motive or if this was, as Yun described it, a “random, random act.”

Both women have been released from the hospital. Yun’s aunt received 30 stitches for her wounds.

“I’m so proud of the, like the courage to actually stick up like that, it’s insane,” Yun said.

The GoFundMe to help cover expenses while the women recover has raised over $33,000 so far, surpassing its initial $25,000 goal.

The video was the latest to portray a string of attacks on Asian Americans, especially older people, across the country.

“It doesn’t make sense why they would come here to make a living and get treated like this in a community that should embrace [them],” Yun told CBS Baltimore, “because we’ve been here for over 20 something years, we are a part of this community.”