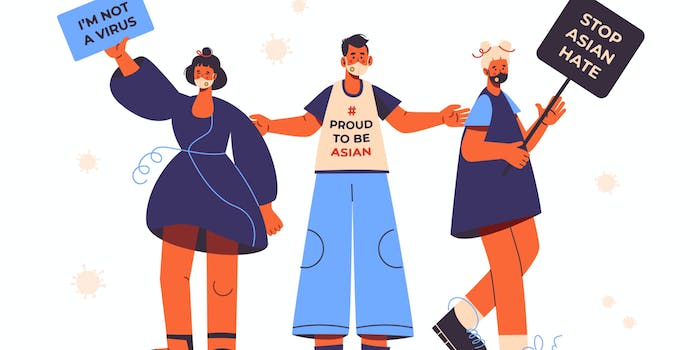 The 'perpetual foreigner' stereotype was magnified with the COVID pandemic.

Leung, 34, is the designer and founder of HEMLEVA, a botanical-inspired accessory company. As an Asian American woman entrepreneur, she was afraid of what would happen to her business if customers found out she was Asian on social media. It was a deliberate choice to hide.

“It goes back to a mentality that if you keep yourself small and quiet, then it makes it harder for people to target you,” Leung told the Daily Dot.

Growing up, Leung heard the same few phrases. Everything is OK. Let’s move on. Don’t cause trouble. Even when her neighbors threw rocks at her family. When a gun was drawn on her mom when she asked for someone’s insurance card after their car hit her. When she was called a “dirty Jap.”

Amid a national rise in anti-Asian hate crimes, social media plays dual roles. Videos of vicious attacks have spread online, bringing faces to the issue. Meanwhile, activists and advocates use their platforms to call out discrimination—and investigate its causes. But videos and social media only go so far in conveying the constant fear of violence that’s rooted in anti-Asian stereotypes and magnified amid the COVID pandemic.

Attacks by the numbers

Stop AAPI Hate, a reporting center that tracks and responds to hate crimes against American Asians and Pacific Islanders, received more than 2,500 reports of anti-Asian attacks nationwide between March and August in 2020. Since the start of the pandemic in March, New York Police Department data reports a 1,900% increase in anti-Asian hate crimes.

Stop AAPI Hate’s national report found that verbal harassment made up 70% of the incidents, and physical assaults made up 9%. From sidewalks and herbal shops to the streets of Chinatowns across the country, Asian Americans have been targeted during their commutes to work and in the places they call home. Many are afraid to be in public alone.

Surveillance footage of 84-year-old Vicha Ratanapakdee being slammed to the pavement by a man in San Francisco on Jan. 28, sparked outrage online after his death. Another video of a 91-year-old man being shoved from behind to the ground in Oakland, California, on Jan. 31, prompted actors Daniel Wu and Daniel Dae Kim to offer a $25,000 reward to find the suspect.

Sue Yun, a digital creator on Instagram with more than 20,000 followers, makes graphics that have been widely reposted and shared on social media.

From educating people on the depiction of Asians as the perpetual foreigner and calling for Black and Asian solidarity, Yun is using her platform to speak out against violence.

Online, people have circulated videos and informational graphics on social media to spread awareness and prove that racism against Asians is real. Even Spotify joined online campaigns by creating a collection of playlists under the banner “Stop Asian Hate.”

Social media is not just a tool for education and awareness; it is also being used to find perpetrators of crimes. On Feb. 17, Maggie Cheng’s mother was shoved into a pole by a man in Flushing, New York. After spending five hours in the hospital, Cheng’s mom left with 10 stitches.

“I am heartbroken and devastated,” Cheng posted on Instagram. “Power of the internet, please share and repost and help us find this man responsible for hurting my mother.”

Surveillance footage and photos of the man went viral on social media, and the suspect was apprehended the next day.

“Thank you all again for using your social media platform to post and/or to encourage others to raise awareness,” Chen said. “With the help of all of you, we as a COMMUNITY identified and apprehended the man responsible for this heinous crime.”

“I saw a post that said deciding whether or not you want to show your face when you start your business is something that only impacts people of color,” Leung said. ‘“I was like, ‘Oh my god. That’s exactly what I did.’ So I stopped, and now my face is everywhere.”’

Leung shared a photo of herself on Feb. 10 and talked about her experiences with staying quiet and the ways AAPI hate has impacted her life. She was flooded with personal stories.

“If this is the first time they’re sharing with another person, I want to make sure that they know that they’re heard,” Leung said.

But Leung said it was emotionally draining, especially for someone who grew up in a household where talking about emotions and mental health was heavily stigmatized.

“It’s tough for people to say, ‘My heart hurts right now,’ Leung said. “So when we’re talking about how we raise awareness about AAPI hate, the No. 1 thing is to talk about it, as well as to report it, because it’s much harder for people to ignore us.”

Since the start of the pandemic, Leung lives with a heightened awareness of everyone in her life, even when her mom goes to the grocery store.

“It’s exhausting but I fear for everyone,” Leung said. “I don’t want any of these instances to be their narrative.”

The rise in attacks on Asian Americans is intertwined with the rise in the COVID pandemic, but the complicated history of anti-Asian discrimination in the U.S. goes much farther back.

Leung said the model minority myth, which depicts Asian Americans as the successful and hardworking minority in America, harmfully minimizes racism and pits communities of color against each other. The spread of security footage videos of perpetrators, some of which have been Black people, risked reigniting anti-Blackness within the Asian American community.

Yun called on her followers to resist using the rise in anti-Asian hate crimes to push the “All Lives Matter” narrative and perpetuate the model minority myth.

“Several suspects in recent anti-Asian hate crimes have been Black men, but it is absolutely abhorrent to generalize the entire Black community and further pit our two communities against each other,” Sue said in her post. “You cannot fight racism with racism.”

“I had to do something, above and beyond myself,” Huang told the Daily Dot. “For the community and for this country.”

Committee of 100 released a 142-page report in February detailing the impact of Chinese Americans in American society. Huang said given the rise in anti-Asian hate, it’s important to understand the history and contributions of Asian Americans towards all aspects of American life.

From the Chinese Exclusion Act of 1882, immigration quotas, and Japanese internment camps during World WarII to the brutal killing of Vincent Chin by two autoworkers in 1982, U.S. history is fraught with anti-Asian sentiments and discriminatory acts.

Huang said local and federal support is critical in addressing anti-hate crimes, as well as including Asian American businesses and organizations in the conversations.

Communities fighting hate—online and off

In addition to using social media to spread awareness, AAPI citizens and community organizations are holding virtual town halls, organizing their own citizen patrols, and delivering food to elderly people in their communities in response to the attacks.

Asian American organizations from San Francisco and Oakland gathered Feb. 9 in an online press conference to demand support services for victims and their families and community investment in resources and infrastructure.

“Our seniors shouldn’t have to live in fear,” said Jing Jing He from the Asian Pacific Environmental Network. “Our residents shouldn’t be forced out of their homes and our Chinatown small business owners and residents should not need to form their own patrol teams to fend for themselves.”

According to Factbase, President Donald Trump used the phrase “Chinese virus” more than 20 times between March 16 and March 30, 2020, to refer to the coronavirus. Racially targeted expressions have historically been used in anti-immigrant rhetoric and invoke fear and disgust toward members of a certain group.

“[AAPI youth] feel the pain, sadness, anger and frustration of being both a target of racism while also having their stories and struggles invisibilized due to false narratives,” Pun said.

Leung no longer hides her face. It’s been almost two years since she first made herself visible online, and she now actively works toward leaning on and being more open with others.

“The heart of racism is misunderstanding,” Leung said. “We should be unified in our voicing of racism. Community is everything.”