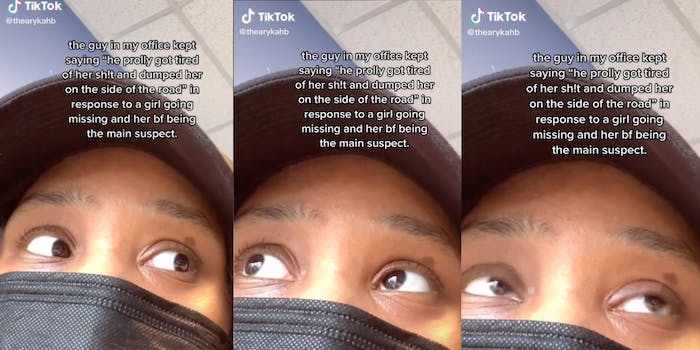 ‘This is scary’: TikToker puts male co-worker on blast for ‘cruel’ remark about Gabby Petito case

'I keep hearing this from guys. It's honestly scary how okay they are with that.'

A video of a woman putting her co-worker on blast over his alleged comments regarding the Gabby Petito case has gained over half a million views on TikTok.

In the video, @thearykahb shares that her co-worker was making concerning comments regarding the case of Gabby Petito, a 22-year-old woman who recently went missing during a cross-country road trip with her fiancé, Brian Laundrie. Laundrie is reportedly a person of interest in her disappearance and has since been reported missing himself (the Petito family reportedly believe he is in hiding). The Daily Dot has previously reported that concerned internet sleuths have been doing some of their own investigative work with Petito’s Instagram account and recent additions to her Spotify library.

The TikToker posted the clip on Sept. 16. In the time since this video was posted, the FBI reportedly announced that remains “consistent” with the description of Petito have been located in Wyoming, although they have not yet been confirmed as the missing woman through forensic evidence.

In a text overlay on the video, the poster wrote, “the guy in my office kept saying ‘he prolly got tired of her shit and dumped her on the side of the road,’ in response to a girl going missing and her bf being the main suspect.”

Commenters on the video are similarly concerned, especially because they’re claiming to have heard this from multiple people.

“I keep hearing this from guys it’s honestly scary how okay they are with that,” one said.

“They literally tell on themselves,” another on of the top comments reads, referring to the red flags problematic men often show unprompted.

A third urged the TikToker to report her co-worker to human resources, saying, “HR bestie.”

The Daily Dot has reached out to @thearykahb regarding her video.