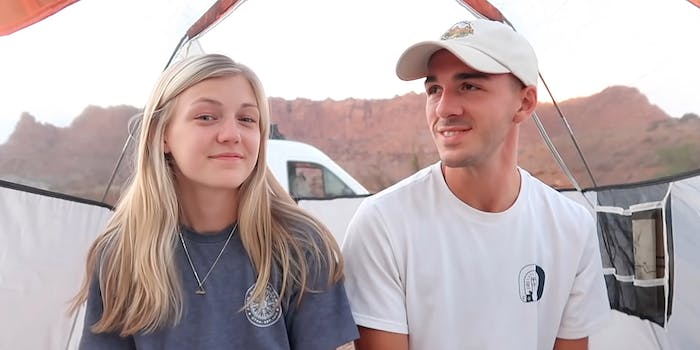 'Some of the songs are on there are slightly concerning.'

As some fans of influencer Gabby Petito look for clues to her mysterious disappearance on Instagram, there’s another corner of the internet people are searching: Her Spotify account.

Petito and her fiancé, Brian Laundrie, were reportedly on a cross-country van trip that began July 2 in New York. The couple, documenting the trip primarily via Instagram posts, reportedly had a dispute Aug. 12 in Moab, Utah, that involved police pulling them over for erratic driving. Police reportedly arranged for Laundrie to stay at a hotel separately from Petito that night.

Two posts appeared on Petito’s Instagram account after that incident, on Aug. 19 and Aug. 25, but a number of her followers believe that she didn’t actually write those posts herself, as they had no location tags (unlike prior ones she’d submitted on the trip. Also, one of the photos appeared to be old. Laundrie was reportedly named a person of interest in Petito’s disappearance on Sept. 15 by police in North Port, Florida.

The Spotify account is under the Nomadic Statik name, which is also used on a placeholder website about their van trip, and a YouTube channel that features a single video previewing their ill-fated trip. It is reportedly Petito’s account, but she shares it with Laundrie.

The “Mtn tops” playlist, which is still accessible on the platform, gained some additions on the day that Petito’s family reported her missing to police.

Fox News, analyzing the choices in its coverage of the story, observed, “Many of the songs … focus on love and heartache.”

The four most recent additions to the list were all Matt Berry selections, including a song called “The Badger’s Wake,” about the death and subsequent decomposition of a badger.

It appears that Laundrie started another playlist, titled “Selfconsumption,” shortly before returning to North Port on Sept. 1, but only got six songs deep.

Outsider observed, regarding the selections, “While it may bring new information to the investigation, it might also hold some darker secrets. Many of the songs seem to have to do with relationship struggles.”

The playlists caught the attention of people online.

The Fox News report also reported, via Laundrie’s attorney Steven Bertolino, that the Laundrie family “hoped that Petito would be found and reunited with her parents,” but “did not respond to repeated questions about whether the couple had broken up.”