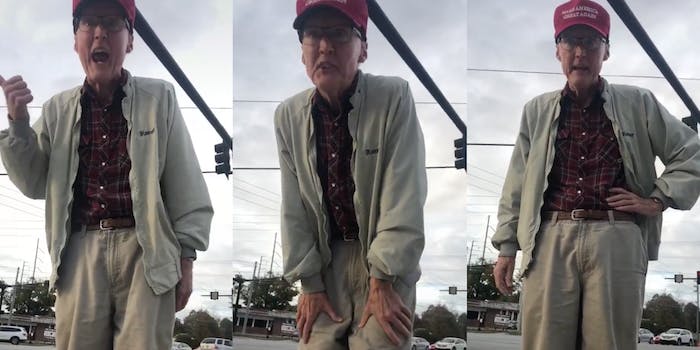 'Why does this feel like it’s from King of The Hill?'

A TikTok video showing an older man apparently getting upset at some teenagers for an anti-Trump sign has Gen Z laughing it up.

TikTok user Owen, who goes by @wednesdaypeters on the video site, posted footage of the encounter to his account in the days following President Donald Trump’s projected loss of the 2020 presidential election.

Owen and his friends were outdoors in Suwanee, Georgia, when they were approached by a much older man wearing a red “Make America Great Again” hat, possibly the most recognizable symbol of the Trump era.

In the video, the man takes a look at the teens’ sign, which Owen told a commenter read “Fuck Trump,” and chastises them for displaying “an obscenity.”

But rather than actually upset over the display, the man seems delighted at the opportunity to harass the teens for their political leanings. “I’m going to give your asses ten minutes to get out of here, or I’m going down to the Suwanee Police Department and have them arrest you for displaying an obscenity,” the man says. “You hear me, bud?”

The teen who is recording, presumably Owen, tells the man that it’s their First Amendment right to display signs in protest of the president. “It’s not,” the man responds. “It’s a f—it’s an obscenity, and you’ve got to get your ass outta here, buddy.”

“No, the courts have ruled—“ the teen starts, but the man interrupts him by announcing he’s heading to the police department immediately and stalks off.

All eyes have been on Georgia in recent days as it’s one of the final states yet to be called for one presidential candidate or the other. The overall state count is extremely close, with Joe Biden currently eking out a lead of around 12,000 votes. Gwinnett County, where Suwanee is located, skewed a little more in Biden’s favor. The final tally gives Biden 58.39% of the vote, compared to Trump’s 40.18%.

Still, the votes are evidence of a divided county in a divided state, and the interaction between the older man and these teenagers is further anecdotal proof of exactly that.

Political views aside, the interaction was so cartoonish that people in the comments couldn’t believe the man was for real. “Why does this feel like it’s from King of The Hill?” one user commented.

“You’re telling me this isn’t satire, like he’s being [for real],” another chimed in. “This feels like a south park episode.”

Another user joked that he “never made it to the police department, legend has it he’s still wandering confused to this day.”

The Daily Dot reached out to Owen for further information about the interaction but did not hear back before publication.