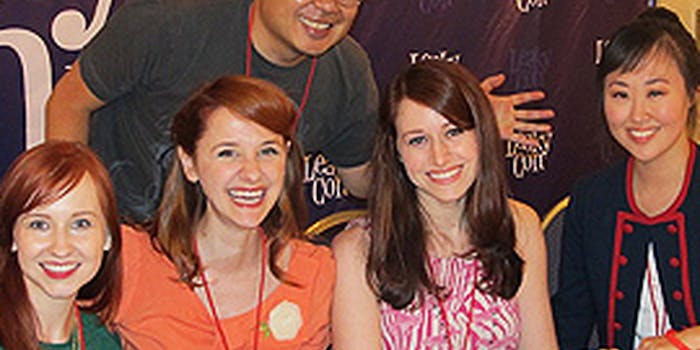 Director Bernie Su and his cast discuss their bold transmedia adaptation of Pride and Prejudice on YouTube.

Retellings of Pride and Prejudice are as universal as single men in want of wives.

But among the ready crop of Jane Austen remakes, The Lizzie Bennet Diaries, a popular modern-day retelling of P&P in Web series form, is rapidly rising to the ‘best-of’ shortlist for many die-hard fans.

Only four months old, The LBD has already drawn in 85,000 subscribers through its brilliant transmedia approach to webisode narrative. With new short episodes appearing every Monday and Friday and other content updated throughout the week, the series is deeply invested in worldbuilding and characterization.

Modern-day Elizabeth Bennet has a Tumblr, while Jane is a fashion blogger with her own Lookbook account. When she breaks away from the main narrative in the original work, wild child Lydia now gets to bring along her smart phone and record her own mini-Web series. And even though we’ve yet to meet Mr. Darcy, he still has his own Twitter, where we’re treated to such enthralling characterization as, “Fine. One drink,” and, “I think I speak for all of us when I say ‘meh.’”

Vlogbrother Hank Green, together with writer/director Bernie Su, created the Web series together after Green, whose wife is a huge Austenite, came up with the idea. But the fact that two men are helming a predominantly female narrative only makes them more dedicated to doing it justice, as The Daily Dot learned when Su and the LBD cast graced us with an exclusive interview.

Daily Dot: Did you start out wanting to make a transmedia adaptation, or did you start with Pride and Prejudice?

Bernie Su: It started with Hank coming to me and saying, ‘Is there a way to do a book adaptation as a vlog?’ As a student of storytelling, as I learned more about transmedia, I was like, ‘[Lizzie]’s self-aware, so it would be really easy to integrate all these things.’ Jane Bennet, Fashion Blogger? I was like, this, we have to do. The transmedia producer on this team, Jay Bushman, has been trying to do a transmedia version of Pride and Prejudice for years.

DD: The show filmed an episode at VidCon. Would Lizzie ever go to Comic Con?

BS: The VidCon thing only worked because the timing in the story just happened that way. Are any of these four [indicating the actresses] a Comic Con fangirl? Maybe Charlotte.

Julia Cho: I would have been all for it! We are somewhat at the mercy of logistical issues, especially timing.

DD: Do you (the cast members) ever have leeway over small things about how a scene is filmed? Would Lydia ever get to take a camera to Bonnaroo?

Mary Kate Wiles: Or to the mall!

Laura Spencer: Would Jane ever put herself on camera? Probably not!

Ashley Clements: We do tweak lines. Bernie’s great about listening to us. He respects how much we know about our characters. Especially the Q&As, he’ll ask, “How do you think Lizzie would respond to that?”

DD: Mary Kate, Kitty [Bennet] is actually your cat. Was that your idea?

MKW: No, but Bernie called me and said, “We’re going to make Kitty a cat.” I said, “Great, I have a cat.” My cat was really thrilled. My cat has more Twitter followers than me.

BS: I texted Mary Kate and was like, “Could you sing me the outro [to the Kitty episode] in meows?” And she did it, and I could not stop laughing.

DD: How many weeks ahead do you guys typically record?

BS: We’re around 4 to 6 weeks ahead depending on where we are. We don’t want to shoot too far ahead because we want to be adaptable.

DD: So that means that we can expect to see Wickham?

BS: In 4-6 weeks. [Note: The LBD announced the actor playing Wickham, Wes Aderhold, later that day. Green confirmed that Darcy has not yet been cast.]

DD: Would you consider casting an African-American as Darcy and completely branching out from the staid English type that we all have in our heads?

BS: We are open-minded to every race for every character, not just Darcy.

DD: Would you ever introduce a queer character into the show?

AC: I loved in Lydia’s arc that Denny being gay was a casual thing.

BS: There’ve been canon adaptations that say that Caroline is actually attracted to Lizzy instead of Darcy, which actually could make sense.

AC: We’ve gotten comments like that, too. There are a lot of shippers.

BS: There’s a lot of potential ambiguity in upcoming characters. You could make Wickham bisexual if you really wanted to.

DD: Have any of you ever read alternate adaptations apart from Bridget Jones’ Diary, such as amateur fanfic?

AC: I just read my very first LBD fanfiction, and it was like reading a romance novel in which the main character is extremely like you! All this has introduced me to a whole new world. I recently became a big Doctor Who fan. I’ve always been a big Harry Potter fan, but I never engaged in fando., I really didn’t know about it. It’s so much fun, this whole community.

JC: Fans pay such attention to all the details and read into things that we don’t notice at first glance. It’s impressive and flattering.

DD: Does that get overwhelming?

JC: Definitely in a positive way.

MKW: I’m just as excited to meet fans in person as they are to meet us. I’ve never experienced anything like this.

DD: Do you ever feel pressured to change things based on fan reactions?

BS: We learned early on that you can’t listen to every fan. The most recent backlash was Lizzie being very abrasive. Clearly that criticism hit [Hank], so we’re going to talk about it. But she represents the “prejudice” side of the story, and she’s also a vlogger. Good vloggers have opinions.

DD: Laura and Julia both said that Ashley was most like her character [Lizzie]. When you cast, are you looking for a certain spark?

BS: Mary Kate was so strong as Lydia that we were pretty sure we were going with her early on. When Christopher Sean [who plays Bing Lee] came to his callback, he flubbed a bunch of his lines. But he flubbed them in a way that was endearing because he was intimidated by Laura [who plays Jane], the way Bingley would be. He’s able to draw that nervousness out into performance. It’s a big contrast to that modern manly man attitude.

BS: Oh, huge. I don’t know if geek guys can really empathize with geek girls because they’re taught that a “strong woman” is a scantily clad woman. I like women in my entertainment to be independent and vocal and strong—not because they can kick ass, but because they’re great thinkers. Like Caroline, I wanted this character who was studied in manipulation, who’d read The Art of War, who had all this power and agency.

DD: Pride and Prejudice is such a female-dominated thing. Do you feel like the show, because it’s produced by men but is all about women, is changing perceptions about what men and women can do within geek culture?

BS: I hope so. Whedon does a great job of it, obviously. With this series, I knew we couldn’t make it all about marriage. Let’s bring in education, and career, and dreams, and these grander things in life. It really was important to me to pass the Bechdel test, and not have all the girls fight over guys. I’ve never identified with the super guy geeks. I feel like I can give voice to what I’ve seen women experience regarding racism and sexism.

DD: Was there a tipping point where you realized this was turning into a phenomenon?

AC: It’s one thing to watch the numbers tick up on YouTube. That was absolutely a Hank Green Effect. But none of us had any concept of what VidCon would be like. I think we were all really excited and overwhelmed and deeply touched by the amount of support the show has and the amount of love fans have for these characters.