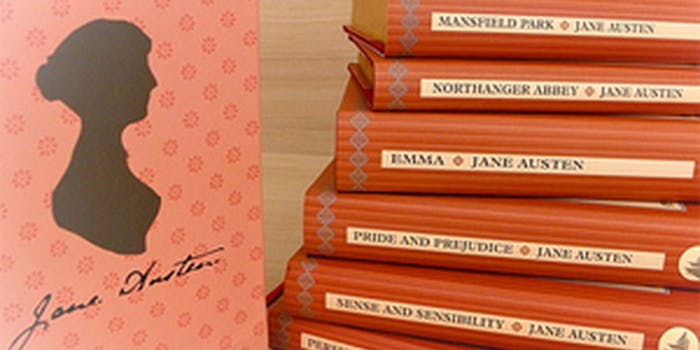 Austen mashups are nothing new to Janeites

Online fanfiction communities were mashing up Jane Austen's novels long before Pride and Prejudice and Zombies made it profitable.

As any hardcore Janeite can tell you, the trend of authors writing sequels, alternate viewpoints, or even totally new renditions of Jane Austen’s six novels is nothing new. It’s been going on for a century—ever since a romance writer named Sybil Brinton published Old Friends and New Fancies, a 1913 crossover uniting characters from three Austen novels at once.

Although Jane Austen is now the second-most popular author taught at universities (after Shakespeare), her works have historically been considered lowbrow. “Universities didn’t pay much attention to her,” Sheryl Craig of The Jane Austen Society of North America (JASNA) told the Daily Dot. “She was considered popular culture, like Dickens.”

Today, sequels to Jane Austen’s novels are so popular that entire publishing presses have been formed around them. The Republic of Pemberley lists reviews for hundreds of such novels, and that list is by no means complete. There’s even a musical.

Recently, Internet culture has had its own go at the books, with viral hits like Jane Austen’s Fight Club. Kate Beaton’s “Ooh, Mr. Darcy!” has morphed into a universal fandom meme, and the cross-platform series The Lizzie Bennet Diaries, a modernization of Pride and Prejudice played out on YouTube, Tumblr, and Twitter, is racking up massive hit counts from enthralled readers.

And then there’s the fanfiction. Over at the Derbyshire Writers Guild, one of the oldest web archives for Austen fanfic (or JAFF), writers can post sequels and modern-day remixes. “I have read a lot of snickering or frustrated comments from old-time JAFFers every time there’s an article in a magazine or somewhere commenting about JAFF as if it’s a whole brand-new phenomenon,” fanfic writer Suzanne O told the Daily Dot.

Fanfic writers seem surprisingly zen about writing alongside professional authors.  “The proliferation of interest in Jane Austen is a good thing for JAFF writers,” said Suzanne. “It widens the potential audience, and I think the fact that there are so many published JAFFs out there just encourages JAFF writers who are interested to publish themselves.”

Yet some writers struggle with issues similar to that of the Twilight fandom in the wake of numerous fanfics published for profit. One fan told the Daily Dot anonymously, “My irk is less with published fanfiction [than with] stories that started out on boards like DWG and then were published. We’re writing and posting in a community, because we want to support each other, because we love the feedback, the ideas, the help we get. In my mind, published adaptations and stories that are created in online writing communities for fun are completely different things.”

The lines are blurry, however, and given the craze to produce everything from Sense and Sensibility and Sea Monsters to Pride and Prejudice and Monster Trucks, it’s likely that they’ll only become blurrier. “I suppose there are questions about the market becoming glutted,” noted Suzanne O, “but so far JAFFers seem pretty insatiable.”

After two centuries and counting, it certainly seems that way.