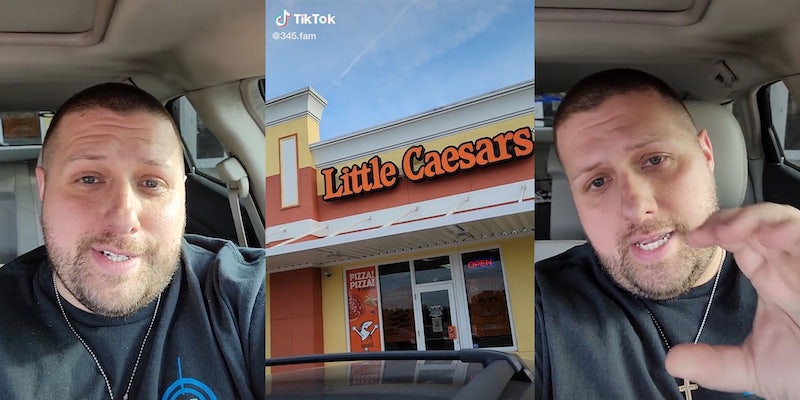 'Health code violation. They can't take it back for any reason.'

A Florida Little Caesars location has come under fire after a customer alleged that employees refused to assist a customer after spilling a packet of sauce.

In summary, a DoorDash driver was leaving the store and dropped a cup of sauce. When a customer went to assist the driver, the driver said they did not want it anymore. This customer then picked up the sauce and asked the employees where to throw it away.

The employees refused to help the customer, encouraging them to throw the sauce away outside the store, as the location had no publicly-accessible trash can, and clean themselves off somewhere else.

This set off a fierce debate on TikTok. On one side, some users said that accepting the garbage would have been a health code violation, or that it was otherwise forbidden in the employee handbook.

“Once it touches the ground and becomes trash it also becomes a health code violation to take it,” claimed one user “How’d the manager [know] you weren’t a secret shopper?”

“Health code violation,” wrote another. “They can’t take it back for any reason.”

However, users on the other side of the debate claimed that this argument does not hold water.

“Everyone that says it’s a policy is ridiculous,” wrote a commenter. “You’re telling me if that kid would have dropped it on the counter they would have just left it there?”

There are also other solutions that don’t involve handling the trash directly. As one user suggested, “grab it with your glove take your glove off and throw it away.”

Plus, as one user asked, “If thats the policy, why cant they put a trash can in the front for customers?”

Additionally, some claim that this would not, in fact, be a health code violation.

“That is bs,” wrote a commenter. “Worked at a LC before and we would have taken it and throw[n] it out. it’s a health code violation if it goes back on the shelf or if the employee doesn’t wash their hands afterwards. many employees have dropped them before and thrown them away so there would be no problem.”