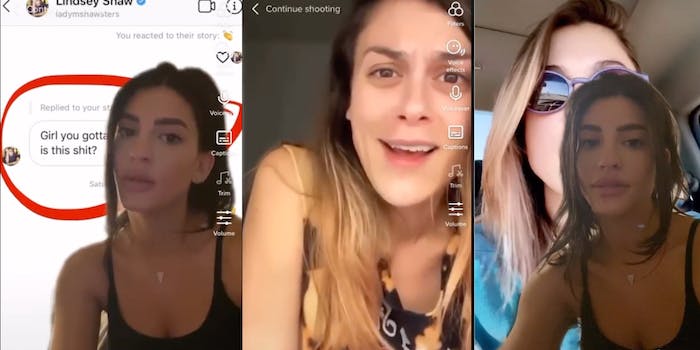 ‘It started when I posted a sexy Story’: Woman exposes Lindsey Shaw following TikTok controversy, calls out her past slut-shaming

Once again, the former Nickelodeon star comes under fire.

Actress Lindsey Shaw, 32, has come under fire for the second time this week after a woman exposed her for past slut-shaming comments.

Shaw was recently criticized for mocking a viral TikTok trend started by Black creators. The former Nickelodeon star then gave a statement and said she would be taking a break from social media.

But under the name @doritoteeth on TikTok and @lindseyshawpt2 on Instagram, a woman is calling out Shaw for cyberbullying her. She posted three videos, but “part one” has since been made unavailable.

In “part two,” posted on Instagram, she explains how she and a mutual friend named Peter were allegedly harassed by Shaw.

“So, it started when I posted a sexy Story on my Instagram and [Shaw] responded by saying, ‘What is this shit?’” she narrates. Screenshots of texts and messages from Shaw are shown in the background throughout the video. The whole message reads: “Girl you gotta go on mute, what is this shit?”

The woman continues: “Then she blocked me, added me back, muted me, then called me random, vapid, and cheap. Then she texted Peter and wished me luck on whatever brothel I ended up in. Then, without saying anything else to me, she posted this whole rant to her Story in which she called me a cyber prostitute.”

“I’m all about women’s liberation… what im not into is women tangling that sentiment that I posted to defend what can only be called, in my mind, cyber prostitution, and to misconstrue the fact that just because you can separate your legs, you can and should on your Instagram.”

The woman continues: “She later reached out and texted me and gave me a half-assed apology [and] told me that she was triggered by me lifting my legs to show my panties. And then she asked if I needed help.”

She said that when their friend Peter, who Shaw has allegedly known for a decade, tried to intervene she “attacked him” and posted video to her Story where she says:

“Don’t fucking reach out to me during this kind of time, like: ‘I hope you’re OK.’ Don’t do that. You’re not a good friend, man. Stay in North Carolina on the East Coast where you belong,” Shaw says.

The woman says Shaw then texted a group chat, including her and Peter, calling them “fucking rotten holes” and indicating they should self-harm.

“[She] told us to go literally jump in a body of water, which, I don’t know, sounds kind of nice and refreshing. I think she kind of meant for us to harm ourselves, but who fucking knows with this girl.”

She says Shaw continued bullying her and her friends and sent rude messages to a friend who has a child after she posted something sexy to her Instagram Story.

“On her Instagram, where she’s opening her legs, which is by her definition, a cyber prostitute. Now let me remind you, she started all this shit because she said she felt triggered by me lifting my leg up so you could see my panties.

“And the icing on the fucking cake, we have Lindsey Shaw here lifting her leg up so you can see her crotch on Instagram.”

In “part three,” on TikTok, @doritoteeth posted a green-screen video of Shaw ranting about women’s behavior and accountability on social media, seemingly referring to a video that the user posted that Shaw thought was inappropriate. She then gives her a sarcastic response.

“I called my friend out on this and it kind of turned into a thing, and it’s gonna be a whole thing of like, that’s her choice and that’s fine, but you know what? I feel good about the fact that I said something because there’s gotta be a standard,” Shaw says in the video. “That behavior, I don’t understand how it’s empowering. I hope everyone has a friend that’s good enough to be like, ‘Girl, what is going on here?’ You know what I mean? Because we need that; we need to help women be accountable, stay accountable, and to, like, check behavior that sometimes [is] confusing and less than flattering.”

“So, yeah, I called Lindsey out, but you know what? I feel good about the fact that I said something because there needs to be some standards.

“‘I’m sorry you were offended’ is not an apology,” she continues, referring to Shaw’s response over mocking the Black TikTok trend, “especially when you know you’re guilty of what you’re getting accused of. And I hope you have people in your life who are good enough friends to check your behavior when it’s so unflattering and confusing.”

The comments sections did not seem to take Shaw’s side.

“Wow she has a major ego and someone needs to knock her off her pedestal,” said @christinecorujo.

“She has so many pictures of herself in sexy poses. In a low cut bathing suit with her legs up and everything so is she slut shaming you or is she just hiding the fact that she’s attracted to you? >:) she’s a two faced racist thank you for saying something!” wrote @lavender.lichen.

On TikTok, people continued to call out Devon Werkeiser, Shaw’s co-star from sitcom Ned’s Declassified School Survival Guide, who tried to defend Shaw after she received backlash for being racially insensitive.

“If you know Lindsey personally, you know she’s a hater on all sorts of things—Black, white, brown, popular, unpopular—and can be a reactionary and defensive person” Werkheiser says in a TikTok. “But she’s also got a good heart and is dealing with personal issues and challenges that none of you know anything about.”

“Hey @devonwerkheiser this is what you defend,” commented @ingridsshenanigans. “Agreed with what you said to an extent but you need to check her or get away. Look at all the vids.”

The Daily Dot has reached out to the user, Shaw, and Werkheiser for comments.