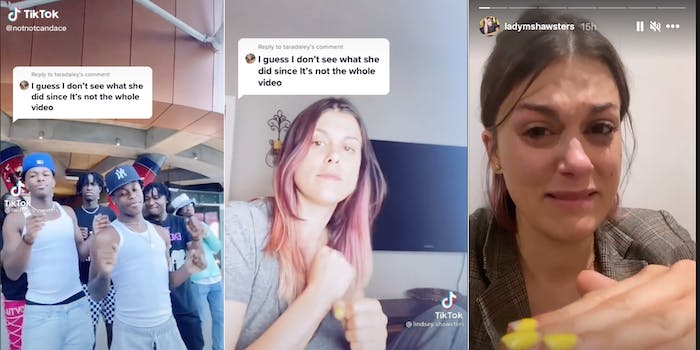 Shaw announced a social media break after tearfully responding to the backlash.

Former Nickelodeon actress Lindsey Shaw is being criticized for mocking a viral TikTok made by Black creators.

The video, which Shaw has since deleted, shows her reacting negatively to the recent TikTok trend. TikToker @notnotcandace reposted the original video, in which Shaw says, “Hey, are we OK? What the fuck is this?” and then mockingly demonstrates the dance from the video.

Immediately people took issue with the video, commenting on the reposted TikTok:

“It’s called vibing… but she wouldn’t know seeing as she couldn’t even do it properly 😳,” wrote @serixdre.

“For anyone confused: She PRAISED her white friend, Devon, for doing the trend, but insulted the black creators,” commented @bgroyal808, referring to Shaw’s Ned’s Declassified School Survival Guide co-star Devon Werkheiser who participated in the trend.

Underneath Werkheiser’s rendition of the trend, Shaw commented, “Get it!!!!” along with several laughing emojis.

Another user posted a duet with the original video, captioned: “why moze got a problem wit dis,” referring to Shaw’s character Moze in Ned’s.

“Woah, Black people having fun, I hope nobody who peaked in Ned’s Declassified School Survival Guide dislikes this,” the user @rafiiiiiiiiiiiiiiiiiii says sarcastically.

“Not everything has to do w race. y’all are so extra on god,” said @mayanazzi.

Shaw then posted on Instagram Stories early Monday morning in response to the criticism.

Crying, Shaw says in a series of Stories:

“OK, I just have to say right now that the hate in my inbox is not OK, OK? I did not mean anything in any kinda way, I am learning everyday as I think everybody is and this kind of hate just needs to evaporate from the planet no matter who it’s directed towards.

“Crocodile tears? No, dude, like, this is like, my soul out there. If you know anything about what I stand for or what I believe in then you know that it’s not this. I am sorry you were offended.

“I think we all need to vibrate higher for the future, and I know I’m gonna keep learning. I think, like, for my own mental health I need to take a step back from social media—I kinda felt that way anyway. But it’s like, I’m not here to offend or belittle anybody at all; I thought that the Millenial and Gen Z thing was a thing on TikTok. The intention wasn’t that serious, y’all. So um, yeah, I gotta just go off of here for a little while, but I appreciate you, I love you, and I’ll be back. And I hope I know more and I hope we all have a little more compassion and understanding.”

The apology did not rub everyone the right way.

“She mocked black ppl and cried over her hate comments on instagram lol,” wrote @notnotcandance in a quilt video. “White tears are dangerous yall,” the caption reads.

“And the fact that she’s turned off her comments speaks volumes. No accountability whatsoever,” commented @cheerfulbettakeeper.

Shaw, who also had a role on Pretty Little Liars, has disabled comments on her Instagram and TikTok accounts.

Another TikToker, @viciouspinky, posted a green screen video in which she pretends to be sleeping while footage of Shaw crying plays in the background. The caption reads “Yawn.”

“It’s funny because she’s the one who started with the hate and now that she’s getting called out it’s the ‘where’s the unity’,” said @teyonnaaustin.

Werkheiser, who has a million followers on TikTok, posted a video responding to Shaw’s controversy, explaining that the situation was “complicated” and arguing there were several elements that should be considered when talking about it.

He starts by discussing by the ongoing issue of Black creators being overlooked on TikTok, despite being the trendsetters of the app.

“There is pain there, and I understand it,” he says in the video. “And this generation, we live in a time where people are standing up for and to that.”

Then he addresses Shaw’s TikTok mocking the viral trend, calling the video “very unnecessary” and acknowledging that her response to the backlash was defensive and reactionary.

“If you know Lindsey personally, you know she’s a hater on all sorts of things—Black, white, brown, popular, unpopular—and can be a reactionary and defensive person” Werkheiser says. “But she’s also got a good heart and is dealing with personal issues and challenges that none of you know anything about.”

That combination created what Werkheiser calls a “perceived racial bias,” and he believes it is an opportunity to educate Shaw on her ignorance. However, instead of that, he says she’s gotten hateful DMs telling her to kill herself. Werkheiser concluded by saying that while it’s important to stand up to prejudice, he is also going to defend his friend’s wellbeing.

“Friends don’t get canceled in real life, and life is complicated,” he said.

The Daily Dot reached out to Shaw for comment.