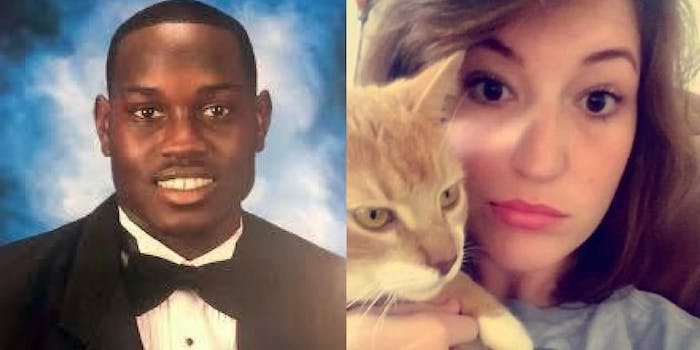 Lindsay McMichael says she didn't have any malicious intent and just posted the photo because she's a 'true crime fan.'

Lindsay McMichael, the sister and daughter of the men suspected of murdering Ahmaud Arbery, admitted to posting a photo of Arbery’s lifeless body at the crime scene to Snapchat.

She defended herself in an interview with the Sun, saying she had no malicious intent and just posted the photo because she’s a “true crime fan.”

“The thing is I’m a huge fan of true crime—I listen to four or five podcasts a week—I’m constantly watching that sort of thing. It was more of a, ‘Holy sh*t, I can’t believe this has happened,'” she told the Sun on Monday.

The photo shows Ahmaud’s body on the ground, covered in blood, according to the Sun. His body is surrounded by crime scene tape and law enforcement officers. She posted the photo on Feb. 23, the same day Arbery was fatally shot.

Arbery’s killing became a national story when footage of his death was made public. In the video, two white men, who are believed to be Travis McMichael and his father Gregory McMichael, are seen pursuing and then shooting Arbery in what has been described as a “modern-day lynching.” Arbery was out for a jog, unarmed.

It was only after the release of the video that the McMichaels were arrested for murder and aggravated assault on May 7.

It is unclear if Lindsay McMichael took the photo herself. The photo reportedly began circulating within the Brunswick, Georgia community, where the shooting took place, prior to the Snapchat post.

McMichael apologized in the Sun interview, saying the Snapchat was in “poor judgment.”

McMichael has previously said in a different Sun interview that she does not believe her brother and father are racists, pointing to her past non-white boyfriends as proof.

Speaking with the Sun, Arbery family lawyer Lee Merritt called McMichael’s Snapchat “very disturbing” but said that “it actually fits in with the pattern of the McMichael family engaging in a weird, violent form of voyeurism.”

Gregory McMichael is the person who leaked the video of Arbery’s killing to a radio station, according to KIRO 7. McMichael reportedly did not think the video would draw public ire or lead to the arrests of him and his son.