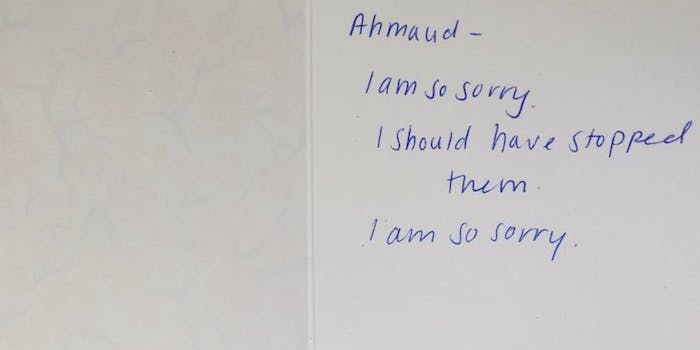 Officials say the person who left the note did not witness the killing.

A note that appeared on Ahmaud Arbery’s site of death apologizing for not intervening raised questions about another potential witness, TMZ reported on Wednesday. But officials say the person who left the note did not witness the killing.

The note was first documented by a News4Jax journalist who shared it in a tweet on Tuesday. The tweet has since been removed.

“While covering the Ahmaud Arbery case on Tuesday, May 12, I noticed this card. I took a photo of it,” journalist Jenese Harris wrote in the tweet. “I understand this is now a piece of evidence and a part of the investigation. Did the person witness the death?”

TMZ shared a photo of the short note where the author wrote, “Ahmaud – I am so sorry. I should have stopped them. I am so sorry.”

The Georgia Bureau of Investigation said in a tweet on Thursday that the individual who left the note “is not connected to the Ahmaud Arbery investigation in any way.”

“This person was expressing their condolences for Arbery’s death,” the bureau added.

The only known witness is William “Roddie” Bryan, the man who recorded the 36-second-long video that surfaced on social media earlier this month and changed the course of the case. There was initially speculation that the note was left from someone else who witnessed the killing.

Two white men, Gregory McMichael, 64, and his son Travis McMichael, 34, killed Arbery in February while he was out on a jog. His killing did not gain national attention until Byran’s video was released and spread across social media in early May.

The outrage on social media led to the father-son duo being charged with murder and aggravated assault last week.

Arbery’s family expressed interest in connecting with the person who left the note, News4Jax reported.

“They feel great sympathy for the person who wrote that note and would like to speak with them to determine what they knew or what they saw,” the family’s attorney reportedly said Wednesday.