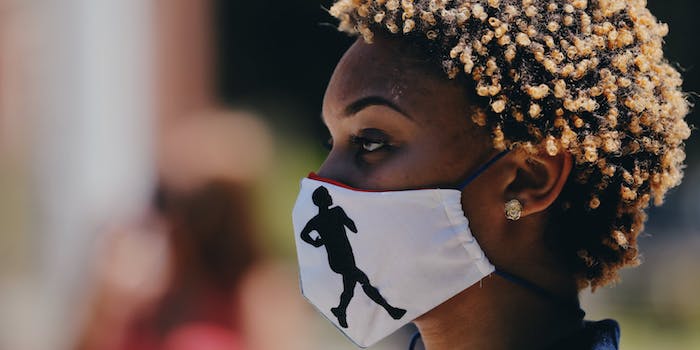 The term is coming up in white supremacy memes and forums.

White supremacists are using the coded term “jogger” as a replacement for the N-word in memes and forums in response to Ahmaud Arbery’s death, Vice reports.

The death of Arbery, who was shot and killed by two white men during his daily jog earlier this year, sparked protests and public outrage. Celebrities like LeBron James took to Twitter to express their frustration.

“We’re literally hunted EVERYDAY/EVERYTIME we step foot outside the comfort of our homes,” James tweeted on May 6. “Can’t even go for a damn jog man!”

While many are demanding justice for Arbery, some have used his death to spew racism in new ways. Per Vice, the term “jogger” is “a direct reference” to Arbery’s death.

Brian Levin, the leader of the Center for the Study of Hate and Extremism at California State University, San Bernardino, told the Daily Dot that white supremacists use this term “because the young, unarmed victim was jogging” when he was killed.

“Horrendous euphemisms for racist terms fly by on the internet,” Levin said. “What we’re seeing is this semi-coded language, which exists either to make some kind of sarcastic point … or to escape social media companies.”

Levin said that it is “a strategy to continue to maintain a presence on social media, where some of the more overt racist terms are a violation of terms of service.”

With the enactment of stay-at-home orders, Levin said he has seen an increase in bigotry online.

After publication, Reddit told the Daily Dot that it will begin monitoring for the word and will take action against those who are using it to harass.

Levin said white supremacists have been using coded racial slurs for years and will most likely continue.

“White supremacy really has a coalesced and globalized subculture online,” Levin said. “So, it will probably have some partial longevity in the darker, racist, vile corners of the internet. This is what we’re going to see somewhat routinely going forward because coming up with ‘snarky’ euphemisms for racist violence is something these bigots have been doing for a long time.”

Update 8:41 p.m. CT, May 15: A Reddit spokesperson said the word “jogger” can no longer be used to harass, adding “In accordance with our site-wide policies, use of the word ‘jogger’ in a manner intended to harass is not welcome on Reddit. Any users or communities engaging in this behavior will be actioned.”