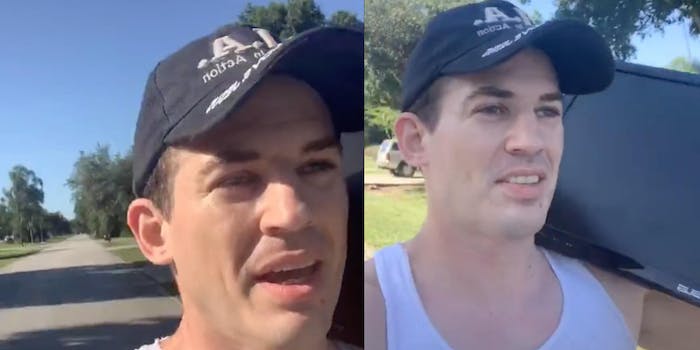 'Just going on a nice, leisurely jog here in the South, in a suburb, carrying a TV,' the former pastor says in a TikTok video.

While people are running to protest the killing of Ahmaud Arbery, one former pastor got creative with his #IRunWithAhmaud demonstration.

In a TikTok video, Richard Demsick runs over two miles with a flat-screen TV to prove that his status as a white male is enough to keep from facing the same fate as Arbery. The 25-year-old was shot and killed while running unarmed in his Brunswick, Georgia neighborhood in February. A surfaced video of the incident only recently went viral, leading to the arrests of Gregory McMichael, 64, and his 34-year-old son, Travis McMichael, in March.

The McMichaels have controversially claimed they believed Arbery was a burglary suspect. According to CNN, no break-ins had been reported in the weeks prior to the shooting, leading many to question the McMichaels’ claims.

Demsick is a former pastor from Vero Beach, Florida, who said “it didn’t matter” how suspicious he looked running with a TV. He said, per the New York Post, that Demsick said his status as a white person would “protect” him.

“Hey guys, just going on a nice, leisurely jog here,” Demsick says in the video. “In the South, in a suburb, carrying a TV, and perfectly safe. Wonder why that is? I run with Ahmaud.”

The caption of the video reads, “happy birthday Ahmaud. Sad to me I ran today with no fear in a similar neighborhood carrying a TV.”