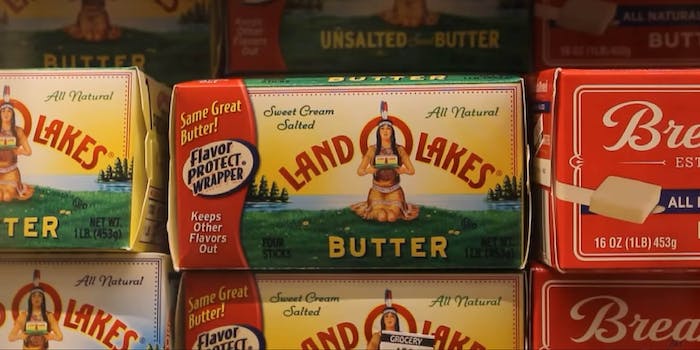 'Land O Lakes can kiss this butter buyer's a**.'

One Twitter user’s plan to boycott Land O’Lakes after it changed its packaging to exclude the image of a Native American woman has the internet in an uproar.

“Land O Lakes can kiss this butter buyer’s ass. My family has been a Land O Lakes family since I can remember. No more. I’m fine with store brand from here on out,” user @nomorenightowl wrote in a since-protected tweet. “Your virtue signaling lost you some good customers who were always willing to pay more for your product.”

The backlash immediately ensued, with many calling out the insensitivity and shortsightedness of the tweet.

“Thousands of native women have gone missing but the only one some white Americans care about is the one on the Land-O-Lakes package,” user @CeeEyes responded.

Others took jabs at those protesting the removal of the image.

“I guarantee the motherfuckers belly-aching about the removal of the Native American woman from the land o lakes packaging don’t know the difference between butter & margarine,” one tweeted.

The tweet also prompted users to share other racist branding depictions that have been removed by companies.

“If people are pissed about the Land O Lakes native american woman being removed from the packaging, wait until they find out about the Frito Bandito getting removed from Fritos,” one user tweeted, along with an old ad featuring the “Frito Bandito,” a Mexican cartoon mascot who was retired in 1971.

A week ago, Land O’Lakes butter announced the removal of the image of a Native American woman from its packaging. According to its press release, the move was made in celebration of its 100th year anniversary to reflect
“the foundation and heart” of the company’s culture, which is clearly embracing calls to remove Native American mascots from brands.

The Twitter user who threatened the company with a boycott has since made their profile private.