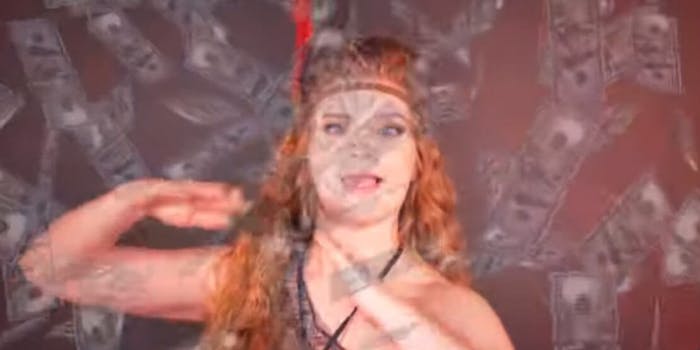 It's a terrible take.

Kaitlin Bennett, better known as the Kent State Gun Girl, isn’t letting coronavirus interfere with her mission to be the most hated person on the internet.

In a video called, “Why the Stimulus Bill is Bad for America,” she goes on a lengthy diatribe about items in the $2 trillion coronavirus stimulus bill.

The money shot comes about seven minutes in, when she lays into the relief the bill provides for Native Americans.

“This next one really makes no sense to me at all,” Bennett says, then lists expenditures earmarked for the nation’s original inhabitants.

Oddly, she can’t contain her laughter as she says that Indian Health Services gets $1 billion and $1.2 billion goes to tenant-based assistance for Native American peoples. Maybe she thinks illnesses and evictions are hilarious.

Bennett then claims that because one million Native Americans reside on reservations, then the $3 billion total of these items amounts to a $3,000 check apiece. Which, she whines, is more than the measly $1,200 check most non-native citizens will get.

It probably goes without saying, but that’s not how it works. If it were, then each American—including the Native Americans—would be receiving $6,000. (Bennett, if you’re reading, that’s $2 trillion divided by 328 million.)

Also, there are five million Native Americans in the U.S. Further, according to the Great Falls Tribune, the stimulus bill actually provides $10 billion of relief for Native American tribes.

But Bennett clearly didn’t want to be right, so much as to offend.

That’s probably why her next move involves donning a Native American costume and moving jerkily along in what must be her idea of an aboriginal dance.

As Bennett dances about, she says, “Lady Sacaga-want-your-taxes here.”

The stunt garnered precisely the kind of attention she craves. Which is to say, negative.

Even some of her fans were appalled.

“The money is for Indian Health Services which are government funded health centers and hospitals required by treaty,” replied @AzieDee. “They are incredibly underfunded and serving the most vulnerable communities. No Native person is getting a $3000 check. Damn. Read a book.”

The video ends as it begins, with Bennett asking for people to donate to her website.

The irony of the fact that she’s dunking on government subsidies while asking people to subsidize her career must be lost on her.