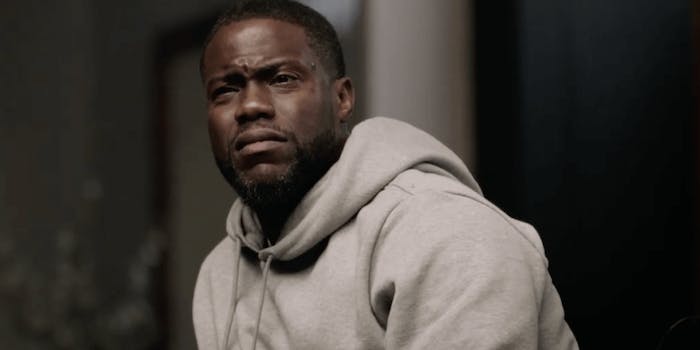 Hart taken to task on social media for his seemingly flippant comments.

Kevin Hart is getting pushback on social media for his comments on HBO’s The Shop: Uninterrupted about Lil Nas X’s decision to come out as gay. Hart casually dismissed the “Old Town Road” singer’s revelation of his sexuality and even chided the 20-year-old for how he came out.

Posing questions for which he knows the answers, Hart seemed to minimize Lil Nas X’s reasoning with the noxious idea that being a gay Black man wasn’t worth a public announcement. The offending comments also appeared in a teaser clip produced by LeBron James’ media vehicle and show.

.@lilnasx speaks the truth about his choice to come out while at the top. More of The Shop on @HBO now! pic.twitter.com/wETNaPUU5t

James, perhaps filming his Space Jam remake at the time of the show’s taping, was not present for the interview. But his co-host Maverick Carter ultimately responded toward the end that Nas X’s homosexuality “didn’t matter” within the context of the singer’s character.

Hart, who was recently seriously injured in a car accident in Malibu, has a history of making anti-LGBTQ comments. His homophobic tweets from 2010 came back to haunt him when he was named host of the Academy Awards, and after a tsunami of public pressure, he declined the gig and went on an apology/non-apology tour.

Often speaking through and over people, Hart dominates the entire episode of The Shop, the third in the series’ second season. Immediately after the premiere, Twitter was aflame with criticism for the show.

“I’m sorry, they put Lil Nas X in a room for them to grill him about coming out when he did??” user @Stevie_mat wrote.

I'm sorry, they put Lil Nas X in a room with known homophobes for them to grill him about coming out when he did??

The concept itself is an act of violence, what the actual fuck.

The look on @LilNasX face after Kevin Hart asks him "why" he felt being gay was stigmatized. That's the face of putting up with gaslighting bullshit for the millionth time.

L*l N*s X is so measured and H*rt looks so defensive and looks pained. “Why are we talking about it?”

Because you’re in the ROOM, dude!

One commenter noted that Lil Nas X’s youth was and is an overlooked factor here.

“Like Nas is not at a level (nor should he be expected) to offer critical analysis on Gay topics and issues,” Twitter user @ThatsSoTunde wrote.

The episode of The Shop: Uninterrupted is available on-demand on HBO.