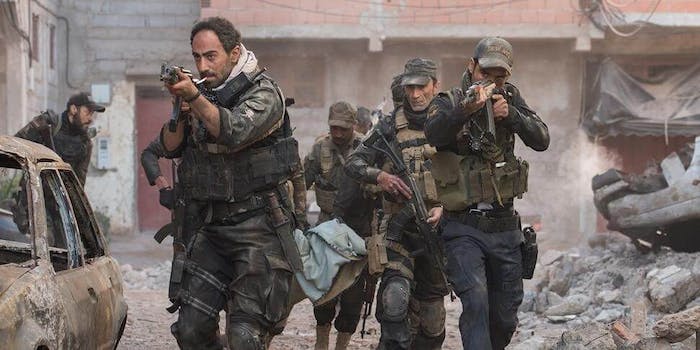 The Arabic-language drama is earning backlash for claiming 'authenticity' while being written and directed by a white American.

After directing four Marvel movies including Avengers: Endgame, the Russo brothers have a lot of Hollywood clout. They’ve got numerous TV and movie projects in the works as producers, the latest being an Arabic-language film called Mosul, premiering at the Venice Film Festival this week.

Inspired by a New Yorker article, it’s a hard-hitting drama about an Iraqi SWAT team battling the rise of Isis. It’s also written and directed by a white American filmmaker, Matthew Michael Carnahan, prompting criticisms on social media due to the Russos’ emphasis on authenticity. These critiques kicked off thanks to a recent Deadline interview highlighting the film’s creative background, which began with Avengers: Endgame co-writer Stephen McFeely sending the New Yorker article to the Russo, and subsequent input from Iraqi executive producer/consultant Mohamed Al Daradji.

Every time I read this article I get more mad. The admit they know nothing about the Middle East and have never lived through war. I dunno imagine hiring someone that did know?!? A REAL ARAB WITH LIVED EXPERIENCE?? #decolonizeHollywood #NoOrientalism #arabavengers #arabtwitter https://t.co/FGgZfZqtMI

Mosul is Carnahan’s directorial debut, although he’s written several films including Deepwater Horizon and 21 Bridges, a Russo-produced thriller about NYPD officers hunting down a pair of cop-killers.

The fact that he hasn’t directed a film before is particularly controversial, due to the long history of Hollywood giving opportunities to inexperienced white men while people of color struggle to breakthrough. People are pointing out that Mosul‘s much-hyped “authenticity” feels hollow if it’s written and directed by someone who learned about the story from an American magazine article and isn’t fluent in Arabic himself. This wasn’t a matter of him personally writing the screenplay and pitching it as his own project – the Russos decided to make the film, then specifically recruited Carnahan to write and direct.

OKAY WE GET IT. It’s profitable to “support” *~diversity~* these days.

BUT SOMEONE TELL ME WHY A MOVIE ABOUT ARABS
IS BEING DIRECTED
BY A WHITE DUDE
WITH NO EXPERIENCE.

Somebody tell me this is a joke. Somebody. #DecolonizeHollywood#NoOrientalismhttps://t.co/geLV2uUyKS

Judging by the Deadline interview, it’s a situation we’ve seen before: A group of well-meaning white men set out to tell a story about an underrepresented group, but they placed themselves at the center of the production.

Most Hollywood movies set in Iraq are English-language stories about American soldiers, so this film probably wouldn’t have happened without the Russos’ clout. Starring an international cast of little-known actors from Iraq, Jordan, England, and Morocco, it’s a hard sell for a mainstream U.S. release. However, the Russos and Carnahan are still the main creative powers behind the film, which immediately sets alarm bells ringing. The hashtags #NoOrientalism and #DecolonizeHollywood highlight just how controversial this issue is. How many directors of Middle Eastern descent get this kind of publicity and support from high-profile Hollywood filmmakers?

The choice of who works behind the camera is just as important as the story you choose to tell. In this case, the Russos decided the best route was to hire consultants to assist an inexperienced white writer/director. They essentially seem to have the opposite attitude to Brad Pitt, who used his A-list clout to quietly produce projects like Selma, Moonlight, The OA, The Last Black Man In San Francisco, and 12 Years A Slave.