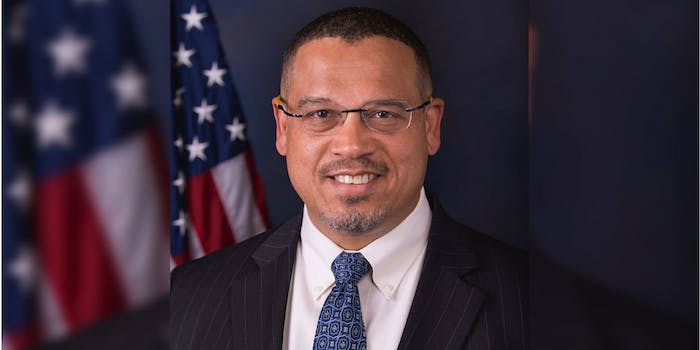 Her son wrote about the alleged abuse on Facebook.

The son of an ex-girlfriend of Minnesota Representative Keith Ellison, the Democratic National Committee’s deputy chair and a candidate for Minnesota attorney general, says that he abused his mother during their long-term relationship. Karen Monahan has since confirmed her son’s account on Twitter.

According to Minnesota Public Radio News, a Facebook post made by Monahan’s 25-year-old son, Austin, said that in 2017 he was on his mother’s computer when he opened a video that he said showed Ellison dragging his mother off the bed by her feet. Austin’s post stated that Ellison called his mother a “fucking bitch” in the video.

Please read, if you care about my mother please share.I love you momma, you wont have to stand…

MPR has reviewed more than 100 texts and Twitter messages between Ellison and Monahan, which show the couple communicating and coordinating plans after the breakup. While there is no evidence of physical abuse in the texts, Ellison told Monahan that writing about their “journey” would be a “Horrible attack on my privacy, unreal.” The video has yet to be shared publicly or reviewed by MPR.

What my son said is true. Every statement he made was true.@keithellison, you know you did that to me. I have given every opportunity to get help and heal. Even now, u r willing to say my son is lying and have me continue to leak more text and info just so others will believe him

On Sunday, Monahan said the Facebook post made by her son was true. Monahan texted Ellison in December 2017 about “the video I have of you trying to drag me off the bed” including abusive language she says he told her. He did not respond to her texts. She told MPR that Ellison met with her the night before he filed for his attorney general campaign, but she didn’t make any promises not to talk about their relationship.

“[Austin] knew I was ready to share my story. I told them to brace themselves because I would be smeared,” Monahan told the outlet. “I took down my Facebook about two days ago, because I didn’t want them seeing nasty messages sent to me.”

In a statement to Minnesota Public Radio and other publications, Ellison denied having abused Monahan.

“I still care deeply for her well-being,” Ellison wrote. “This video does not exist because I never behaved in this way, and any characterization otherwise is false.”

Across Twitter, users are calling out mainstream media companies, questioning why the accounts from Ellison’s ex-girlfriend haven’t been covered. Many assert that Monahan’s assertions would have been given airtime if Ellison was a Republican instead of a Democrat, such as with Alabama Senate candidate Roy Moore. The oustings of former Democratic senators John Conyers and Al Franken following sexual misconduct accusations, however, were covered by mainstream media.

Back in 2006, no left-leaning or mainstream media outlet would touch Amy L. Alexander’s story.

Now in 2018, no left-leaning or mainstream media outlet wants to touch the story of Karen Monahan.

Will these new claims against Keith Ellison also be swept under the rug?#ThemToo

Is the #MeToo movement and #WomensMarch people going to support #KeithEllison’s accuser or no because he’s a Democrat?

If the media weren’t too busy giving 20 white supremacists an audience of 12 million people, they could work to honestly expose the abuse allegations placed against DNC Deputy Chair Keith Ellison.

How long before journos tell us it's okay not to believe the woman just because Keith Ellison is a Dem?

The Minnesota primary that will decide the Democratic candidate for attorney general is Tuesday, though more than 100,000 people have already voted via absentee ballots.