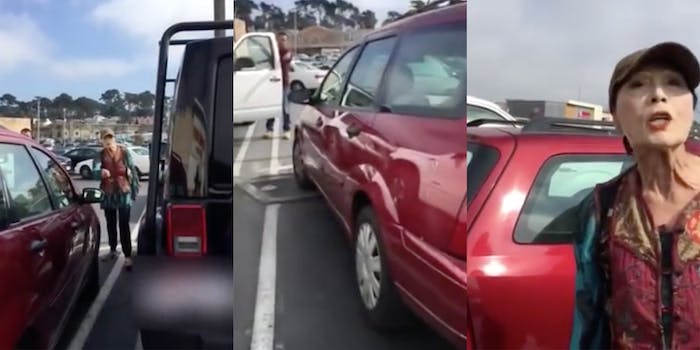 ‘Parking Lot Karen’ 2.0 yells at man who parked in the lines

A viral video shows a woman dubbed a “Karen” shouting at a man because she believes that he parked too close to her car. (She’s not to be confused with the “Parking Lot Karen” who sat on a stranger’s car to prevent them from parking.)

The more recent video, which was uploaded by Reddit user u/maccyboyy, shows a woman shouting angrily at a man for parking his vehicle too close to her red Ford Focus. The woman claims that his Jeep is blocking his daughter from entering her car.

“My daughter has to get in, move it!” the angry shopper yelled.

The footage also shows another woman, presumably the angry woman’s daughter, trying to defend her mother’s outburst and taking pictures of the vehicles.

“No, she’s fine, that car is parked too close to her car,” the woman said.

The man, audibly confused, records the interaction, trying to demonstrate to the parking lot “Karen” that she parked her car badly, and his Jeep was parked perfectly within the lines. The video also shows plenty of space on the driver’s side of the woman’s car.

“Does she do this a lot? Is she OK?” the man asked as he filmed.

The interaction escalated when the man seemingly insulted the woman in Spanish. The woman responded by yelling profanities.

“That [car] is, your dick isn’t it,” the woman shouted. “You’re proud of your old fucking dick, but it’s your car, not you. Viagra my ass!”

The woman continues throwing insults, claiming that the man recording was “getting off” by attacking her.

The video ended with both women eventually walking away from the man to enter the store, leaving the man in disbelief and her vehicle parked in the same position.